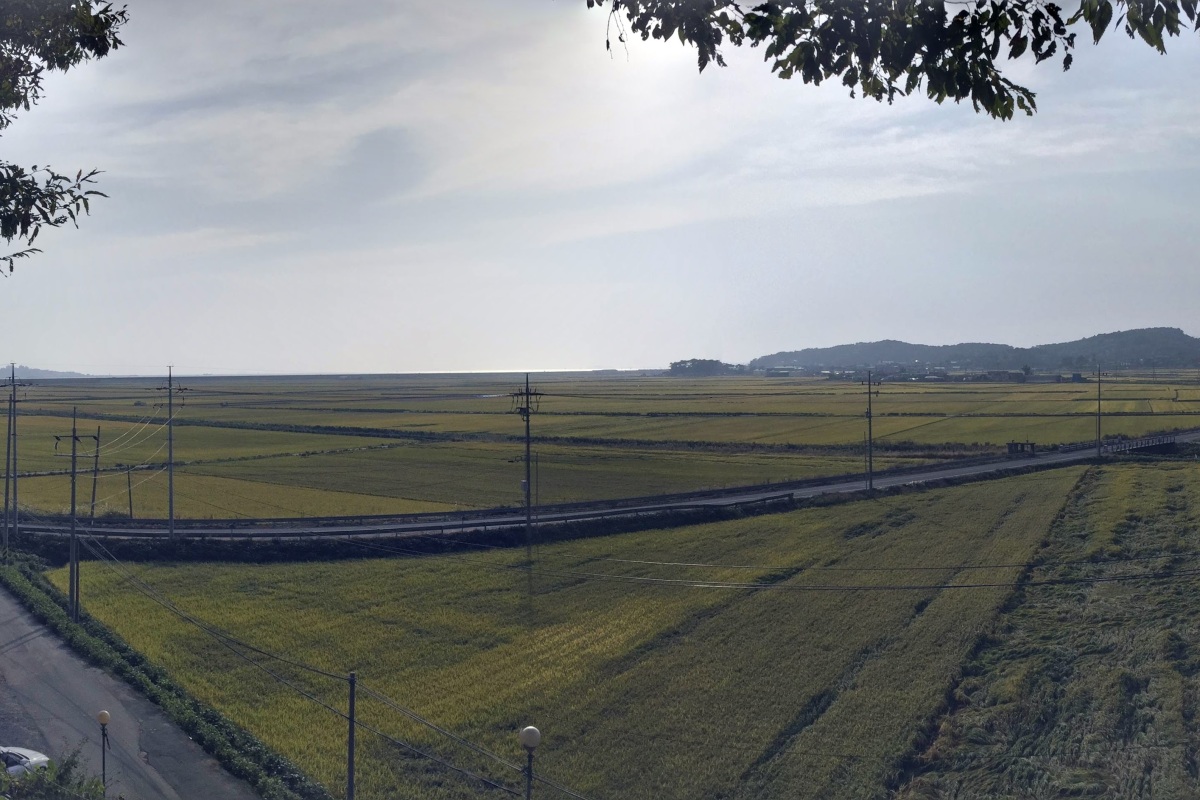 For a three day weekend, we loaded up the car and headed south in the brutal Saturday traffic of Korean highways. Weekend traffic in Korea is like Tony Romo in December, Kiss cover bands, or cold McDonald’s fries, i.e. reliably terrible. Nevertheless, hungover and filled with coffee, we put on dark sunglasses and drove.

Hershey was ready to go. 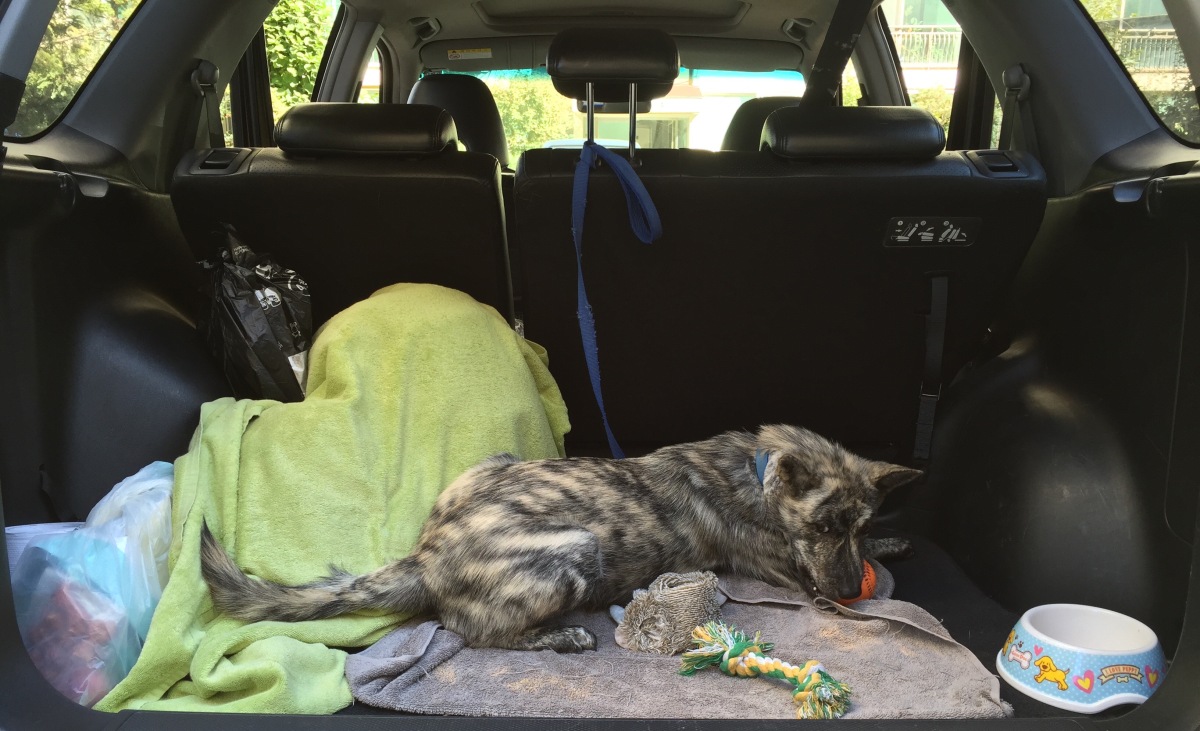 We left before midday, drove about 400 km and arrived at dusk. Stop and go almost the whole way, until we got onto the coastal highway which was moving. Korean landscapes in early fall are fantastically green, fresh and unpopulated. Besides the four or five big cities in Korea, Korea is still just farms resting against mountains. 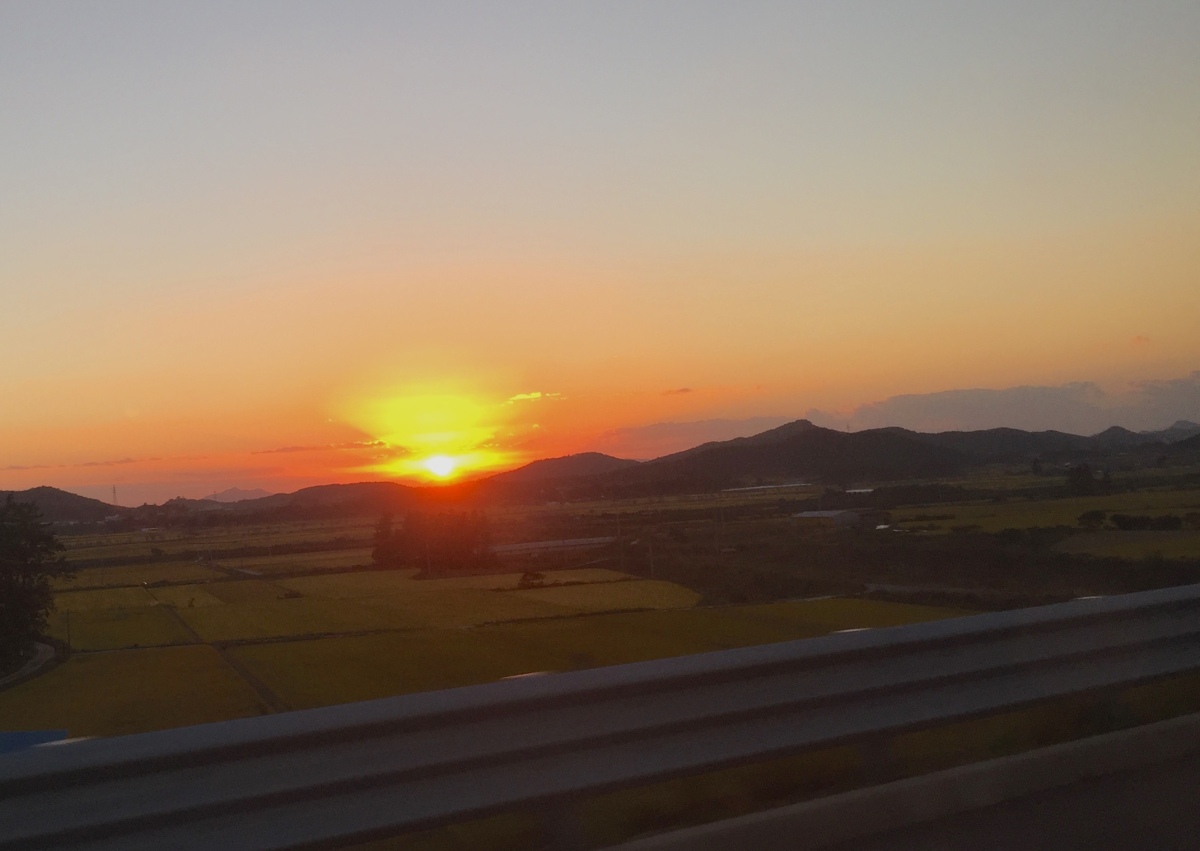 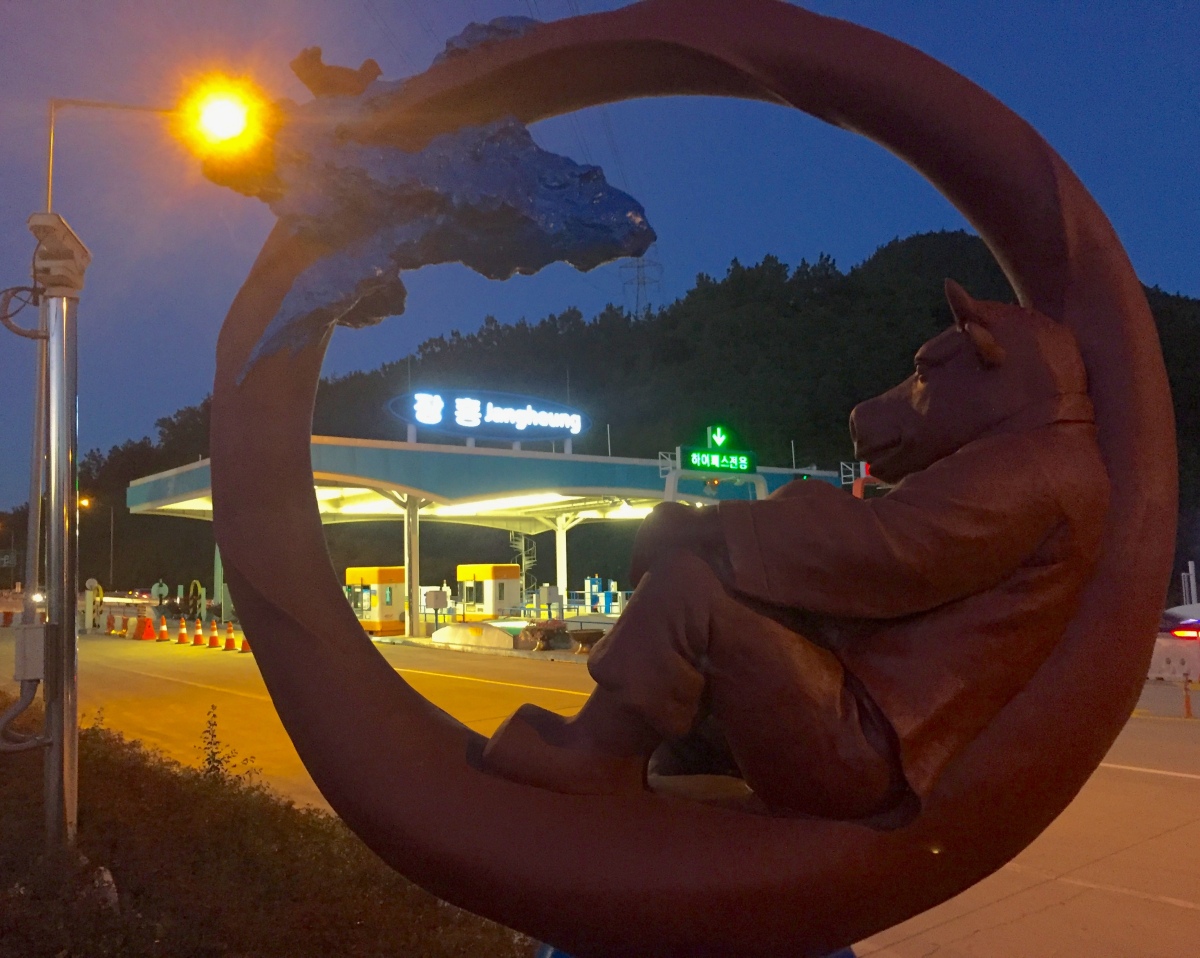 Hungry and tired, we met some of Jordyn’s cousins at a fish place in Jangheung (Korea’s warmest city and Asia’s first “slow food city”). We sat on the floor sans mats and tables. The old ladies carried out a completely set table full of raw sea pieces. I’ve been eating more sea things lately, but ammonia doused sting ray was basically inedible, wriggling octopus is never on my menu and the jellyfish was crunchy but not interesting. I tried everything but we’re still far away from me being excited to eat tentacles. (click picture for a close-up) 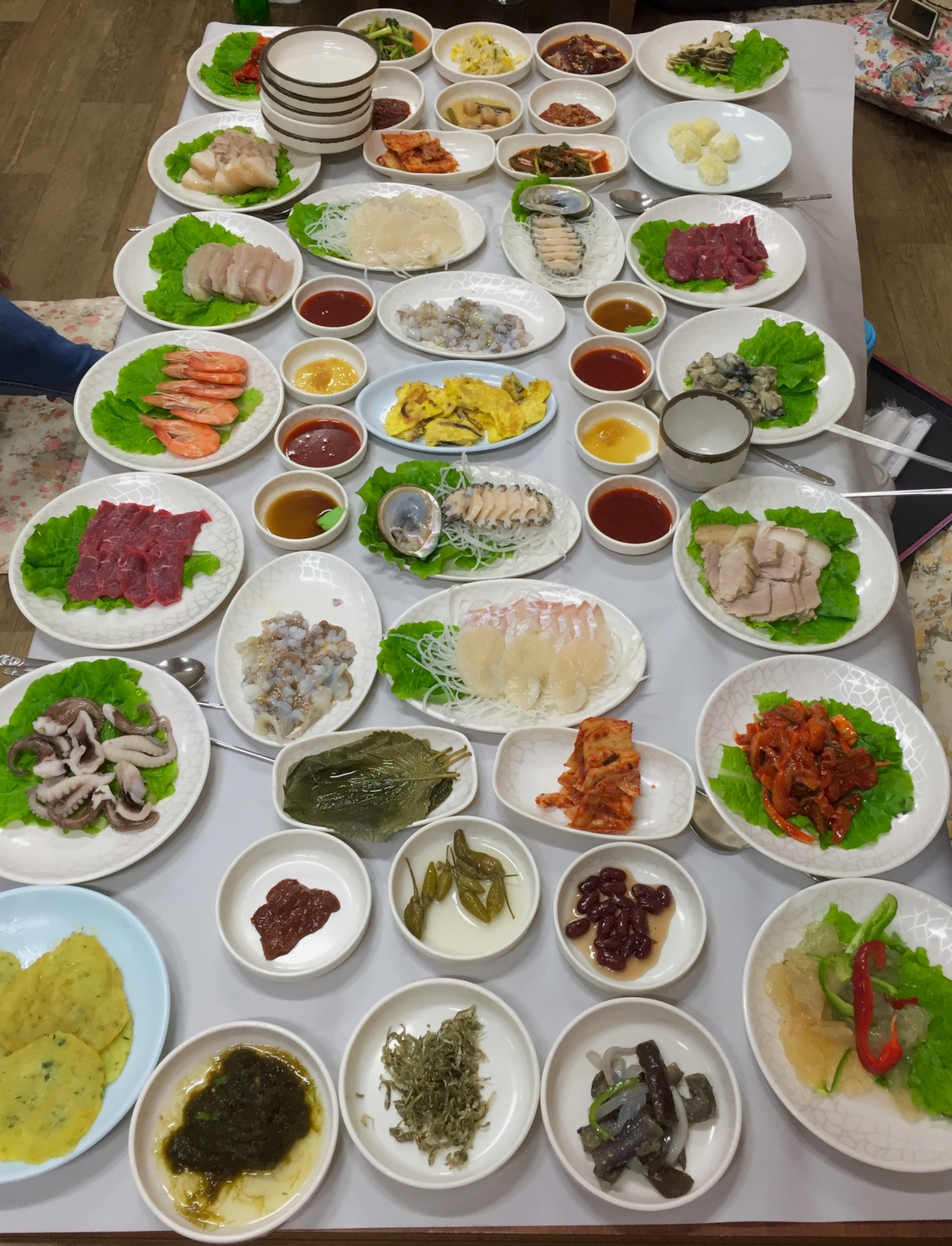 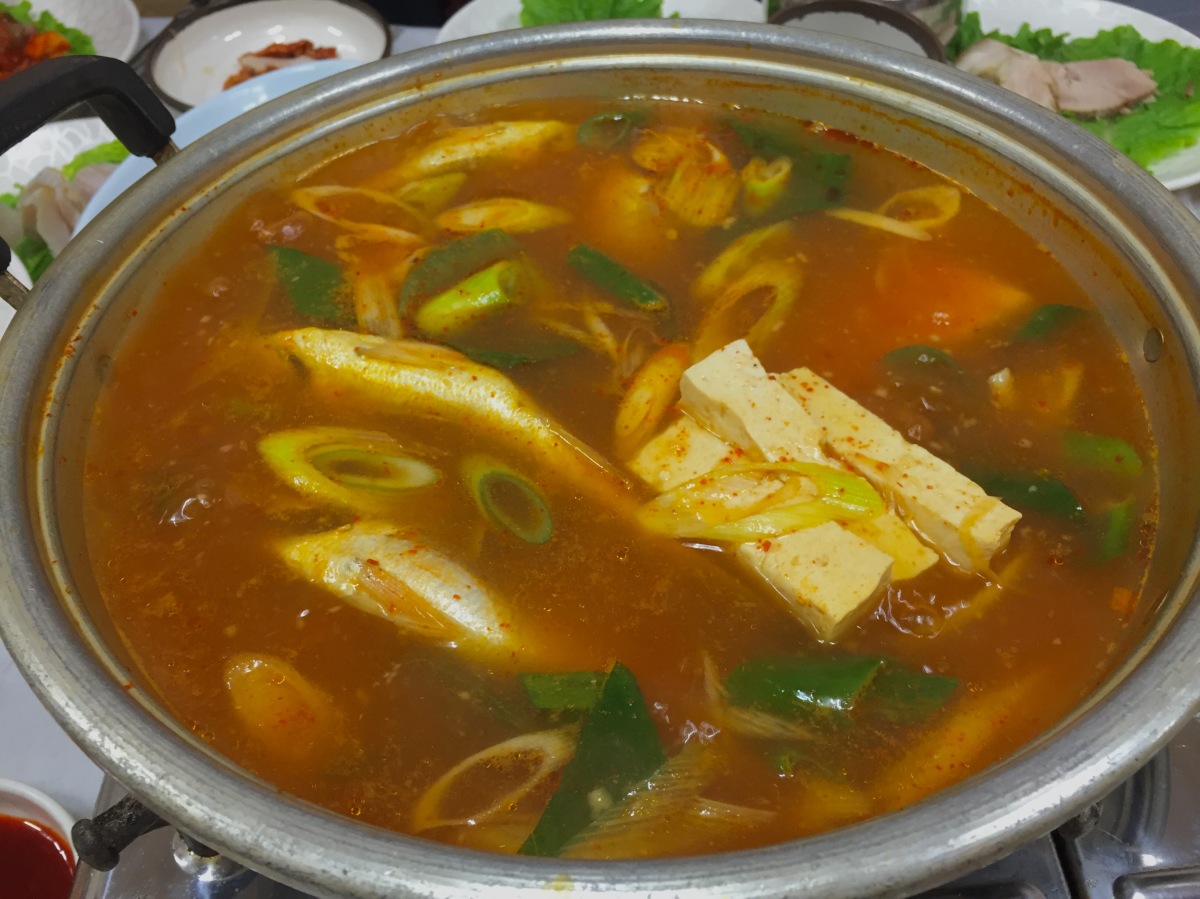 Here’s the close-up of jellyfish. 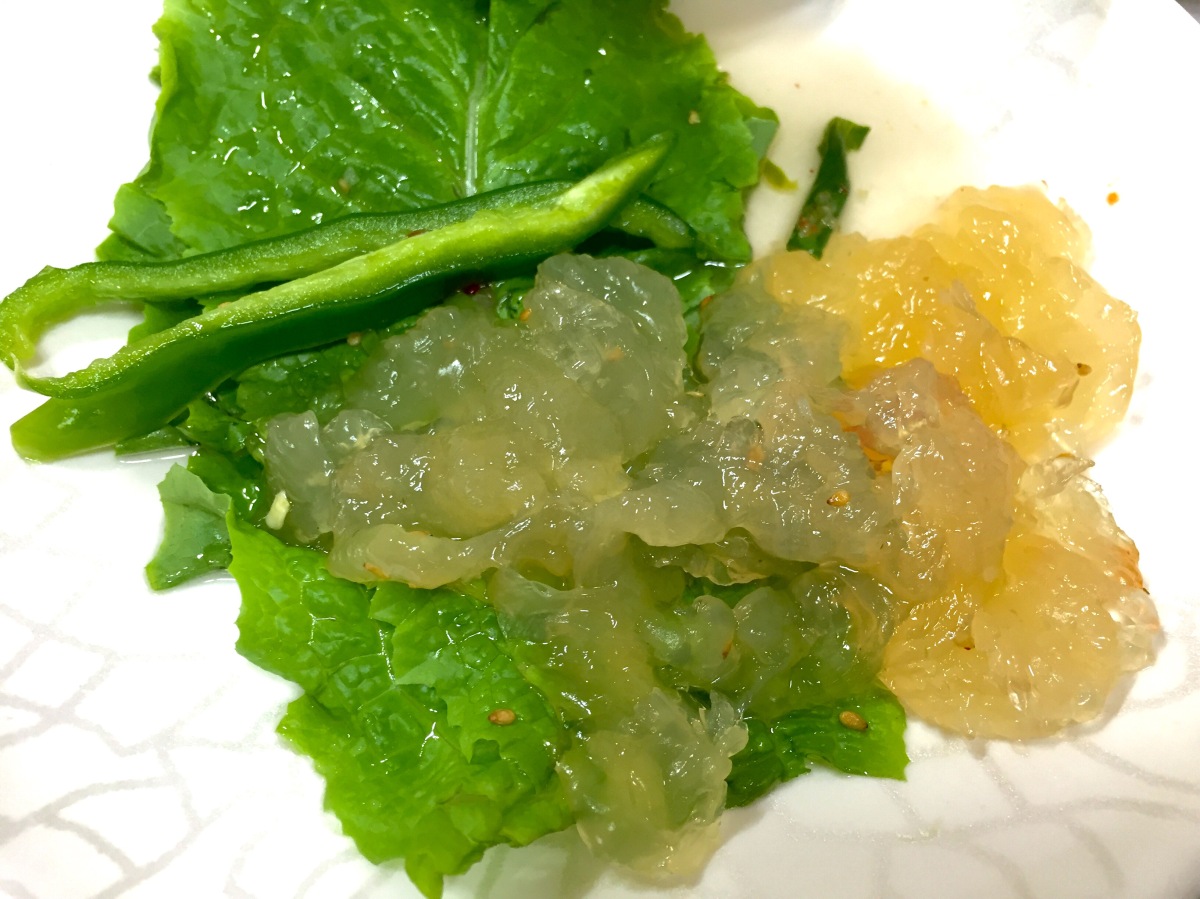 They gave us the softest and tastiest rice cake I’ve ever eaten. We asked for more when we left and they just gave us a plastic bag with about 50 pieces inside. 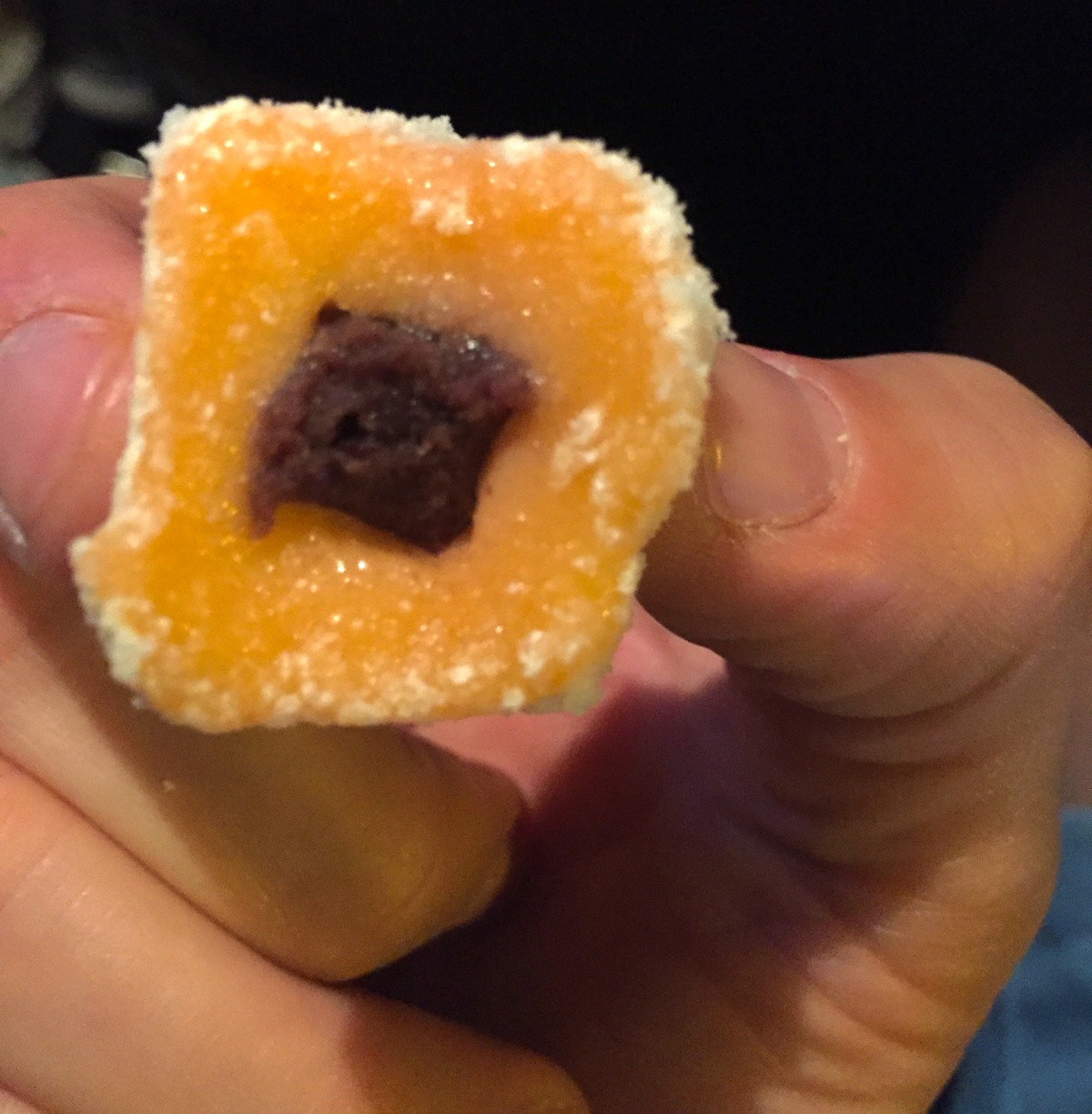 Having done no research, we found every hotel, motel and pension sold out. We stayed at a friends’ mushroom farm in their work office. Somehow they had a floor mat and two couches. We made it work. The guy took us for a tour and gave us some fresh (shiitake) wood mushrooms. Floor to ceiling mushroom logs. This picture is post harvest, I’d like to see the mass of fungus pre-harvest. 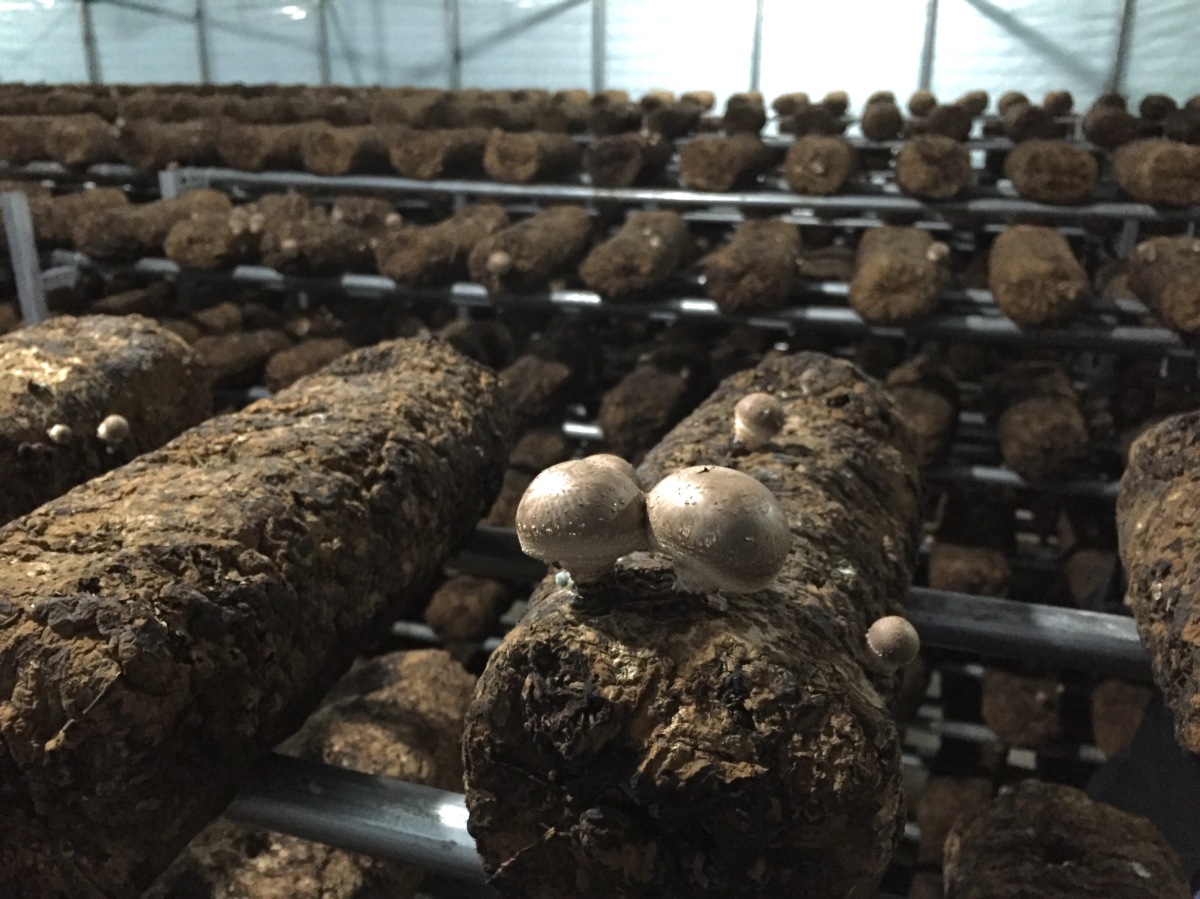 Next day, up early and headed to the little downtown market. We ate some authentic 곰탕 (gomtang) which is oxtail soup. They stew the bones until the broth is white and healthy, then add some fatty beef, scallions and rice and you have magic. The 빈데떡(bindaeddeok) is a Korean pancake full of veggies and sometimes squid. The crunchier the better and this one was crunchtastic. 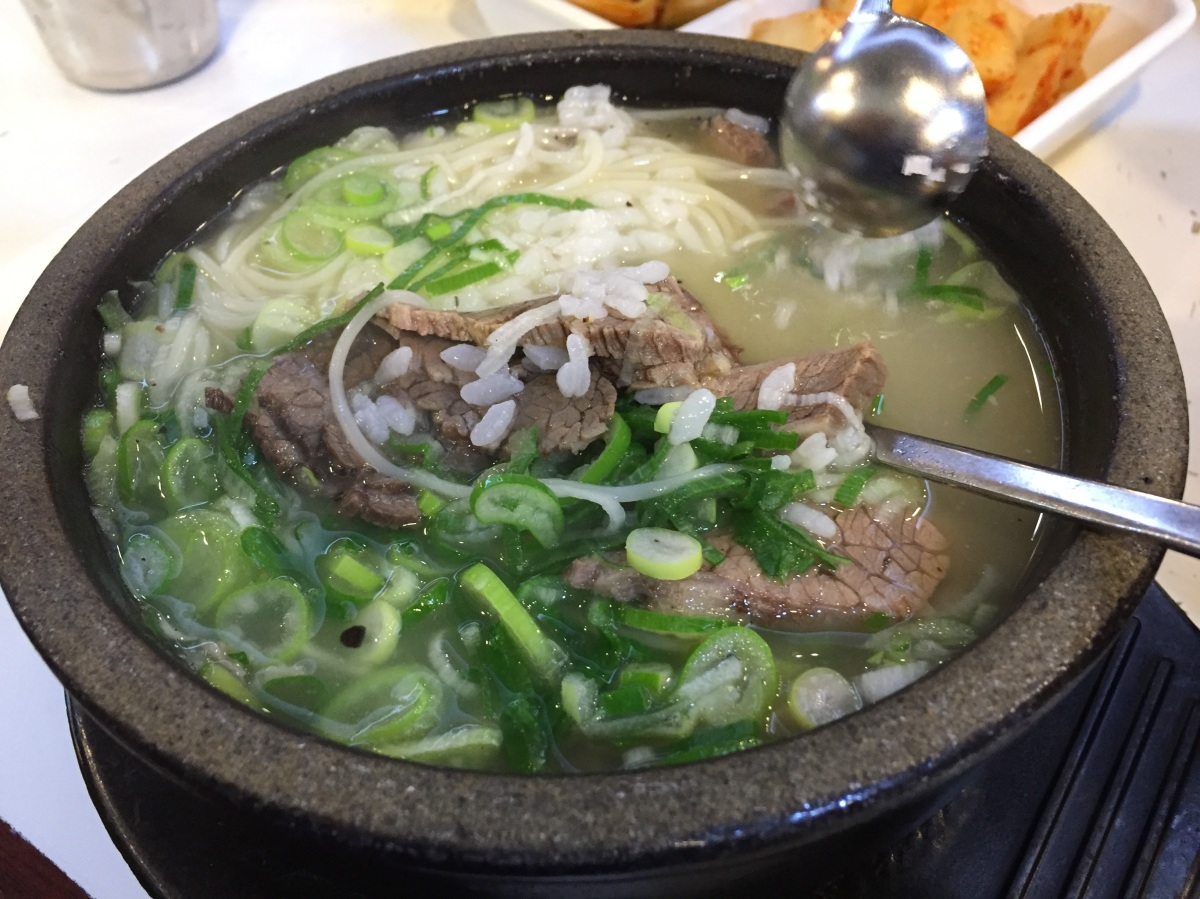 After some shopping with the kimchi creators, we headed to the ocean.

We saw a guy catching fish for my favorite soup, 추어탕 (chuahtang) which is made from ground up mudfish. He just dragged his hook slowly across the mud until one of the mud dwellers, in their feeding/sucking motions, accidentally and unluckily grabbed it. 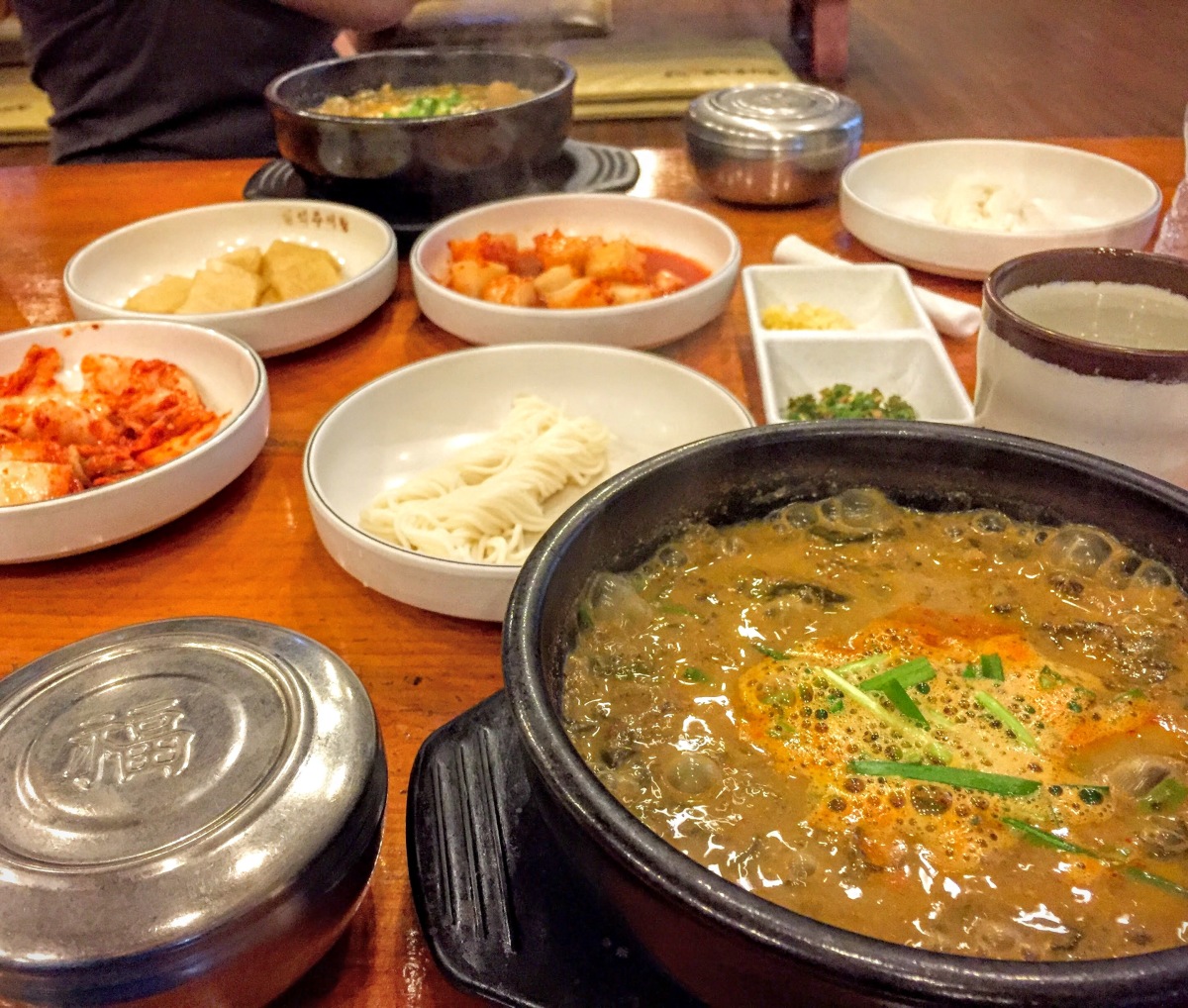 The Koreans ingeniously use conch snail shells to trap young baby octopus looking for a place to hide, then drag them in and eat them alive or in spicy soups.

Before leaving town, we needed some BBQ. There was a place next to the river where you choose the meat at the downstairs butcher and then walk it upstairs and cook. Great stuff.

It was a quick two days, but we ate well and enjoyed the country air. Seeing stars, a lot of stars, at the mushroom farm was unexpected and completely refreshing.