Moving from the sea of Trieste to the lowlands before the Dolomites lies Udine. It’s the largest city in the province, and the only city in Friuli Venezia Giulia to have a professional soccer team in the Serie A. Recently attending a match of Udinese v. Parma, I was lucky enough to see quite a game, including an overhead bicycle kick goal and a home win of 4-2. After some exploring and eating, I’ve got a few pictures of this cozy little town with baby rivulets along the cobblestone sidewalks, the ubiquitous antiquities of anywhere in Italy and of course, some food.

First is my new favorite restaurant, Gustoso. It’s located on Viale Ungheria about two blocks from the University Student Housing. They have plenty of grilled meats, but an unbeatable pizza with crunchy crust and gratuitous toppings. I order spinach on my pizza lately to round out the food groups. 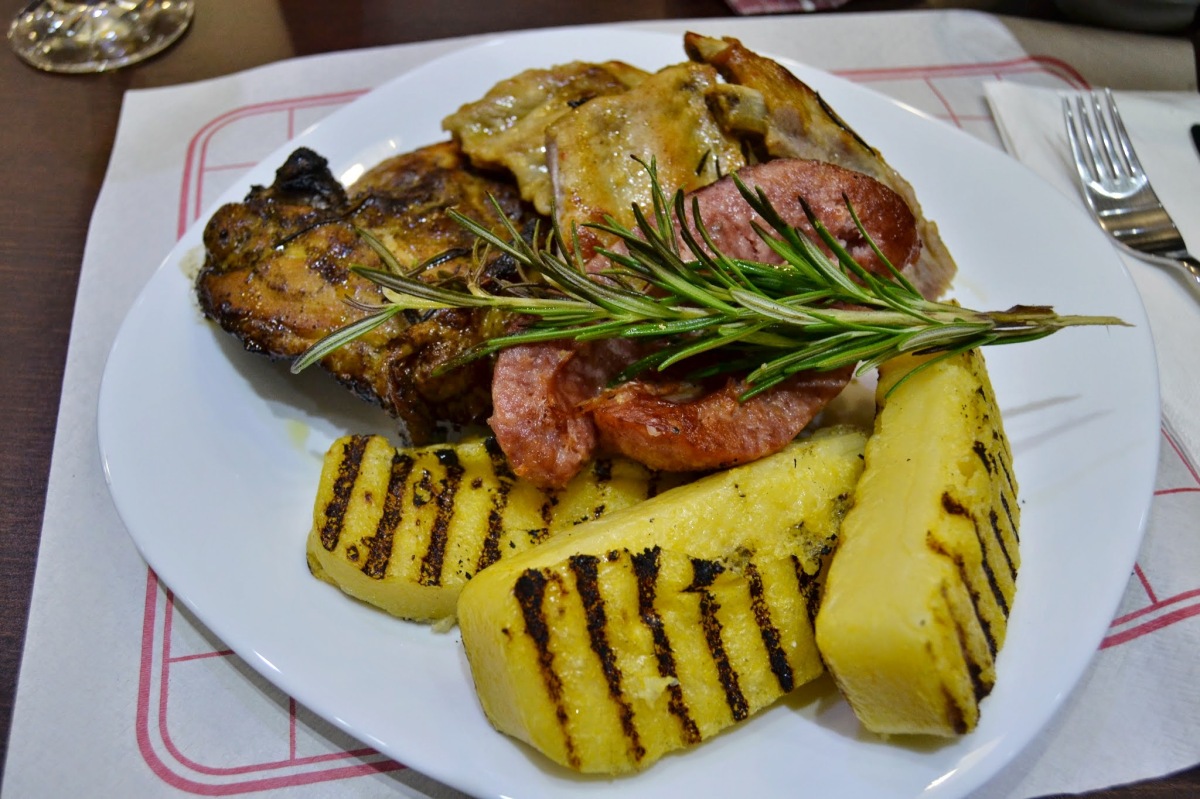 Next is a fantastic place, sitting beside the little city creek in an old wooden building, with an almost unpronounceable name, Osteria Ghiacciaia (Via Zanon 13). I went for dinner around 8:30 and they were fully packed by the time I left an hour or so later with a waiting list outside. Well priced and delicious. I had the papardelle with ragu and the classic Friulian dish of Frico (Montasio cheese with potatoes) coupled with the always rib-sticking and comforting polenta.

Walking home, I caught sight of some Italian women enjoying their evening. One with a wine glass, one with a cigarette, both with trouble in their eyes.

This was a decent place, but overpriced, Aquila Nera (Via Piave 2). I had the spaghetti with radicchio and meat sauce, rather bland; followed by a tender tuna steak with some flavorless potatoes. For the price, I expected more.

There is a small restaurant with low ceilings but high expectations, Trattoria Ai Frati (Piazetta Antonini 5). It was recommended by Google and locals. Busy, bustling interior, loaded with knick-knacks and assorted stuffs everywhere, it felt like a fancy, but crowded living room. It seems to have only two waiters, both continually in motion. I ordered the gnocchi with duck ragù, and baccala (cod) with polenta, with a tiramisu dessert. The gnocchi was outstanding–soft, tasty and comforting; the fish was chewy and not well presented and average tiramisu. 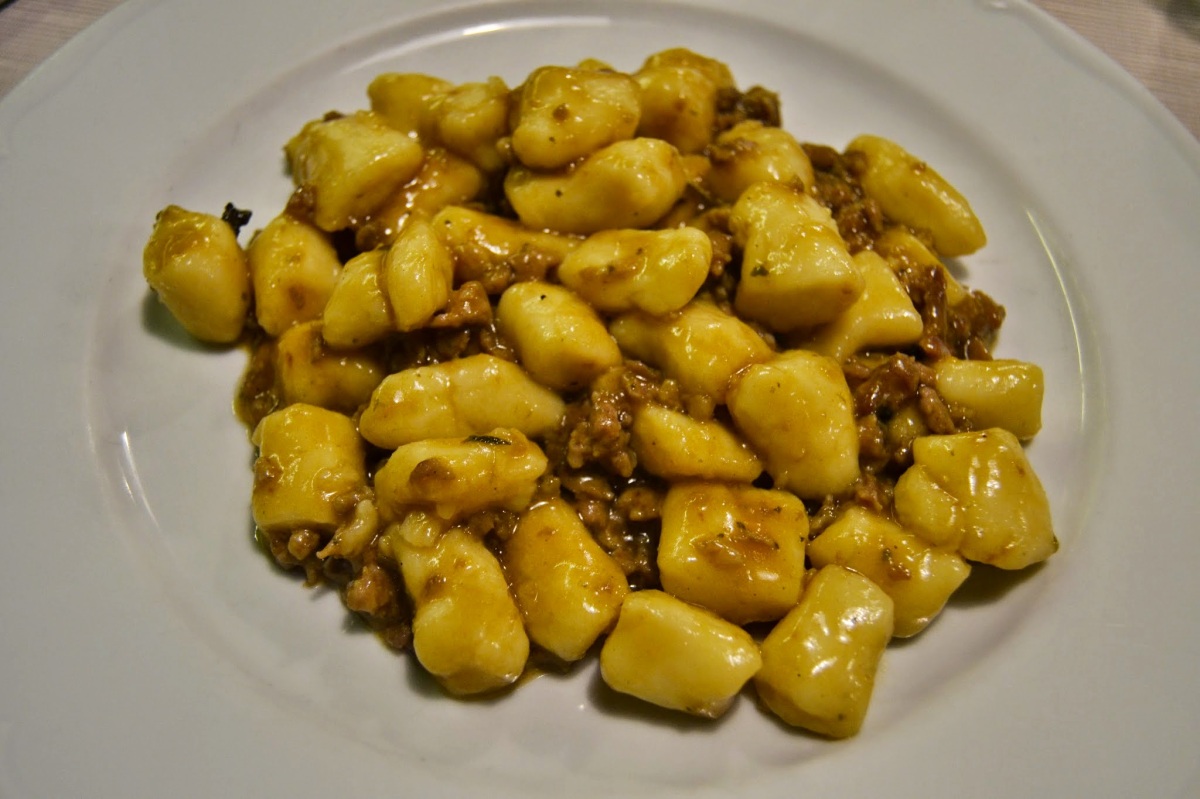 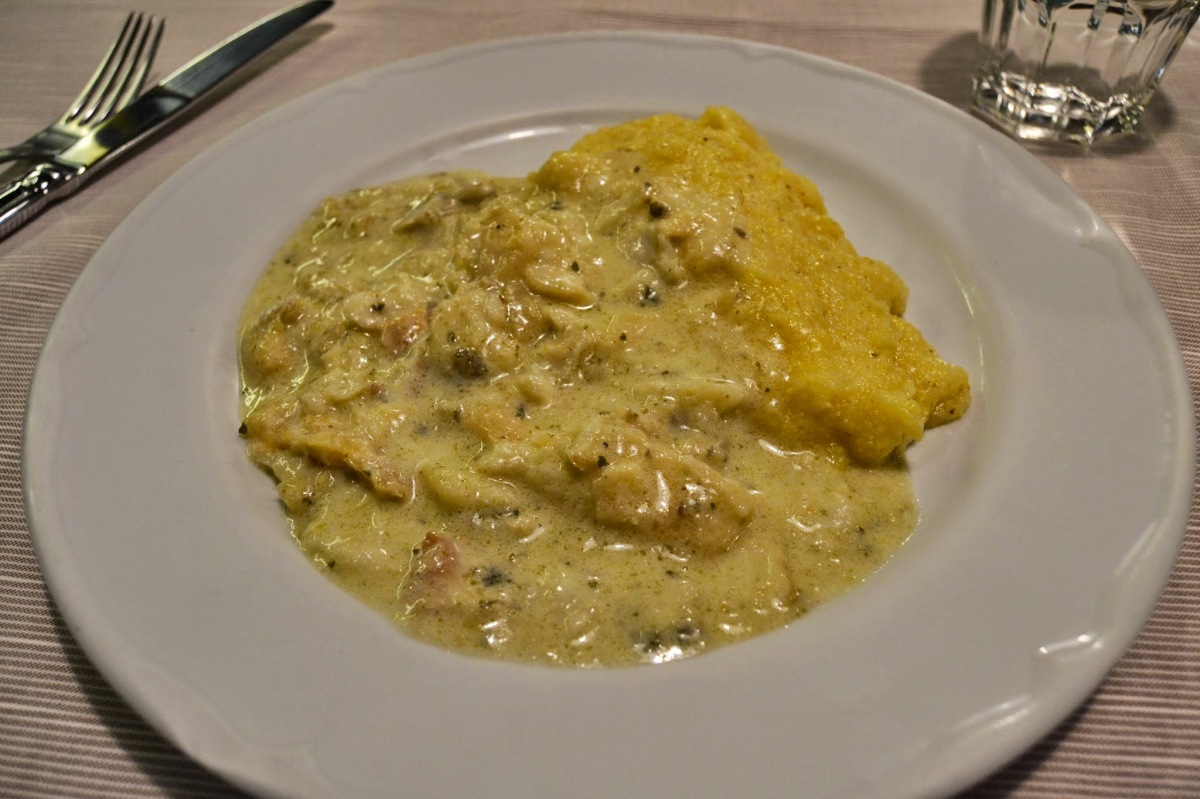 I like the idea of “down home cooking.” Google recommended Antica Trattoria Maddalena (Via Pelliccerie 4) as representative of such a style. A clean, modern appearance when entering, the pleasantly plump hostess, who inexplicably has a tiny t-shirt which exposes her rear-end, walks you up the stairs to the white linen covered and candlelit tables. Romantic but also not intrusive for solo eaters, I ordered the typical food of Carnia, (the mountainous region nearby) Cjarsons, (which are some kind of cinnamon dusted ravioli) and they were quite flavorful in an unexpected, wonderful way; and medallions of pork. Both were satisfying and pleasant. 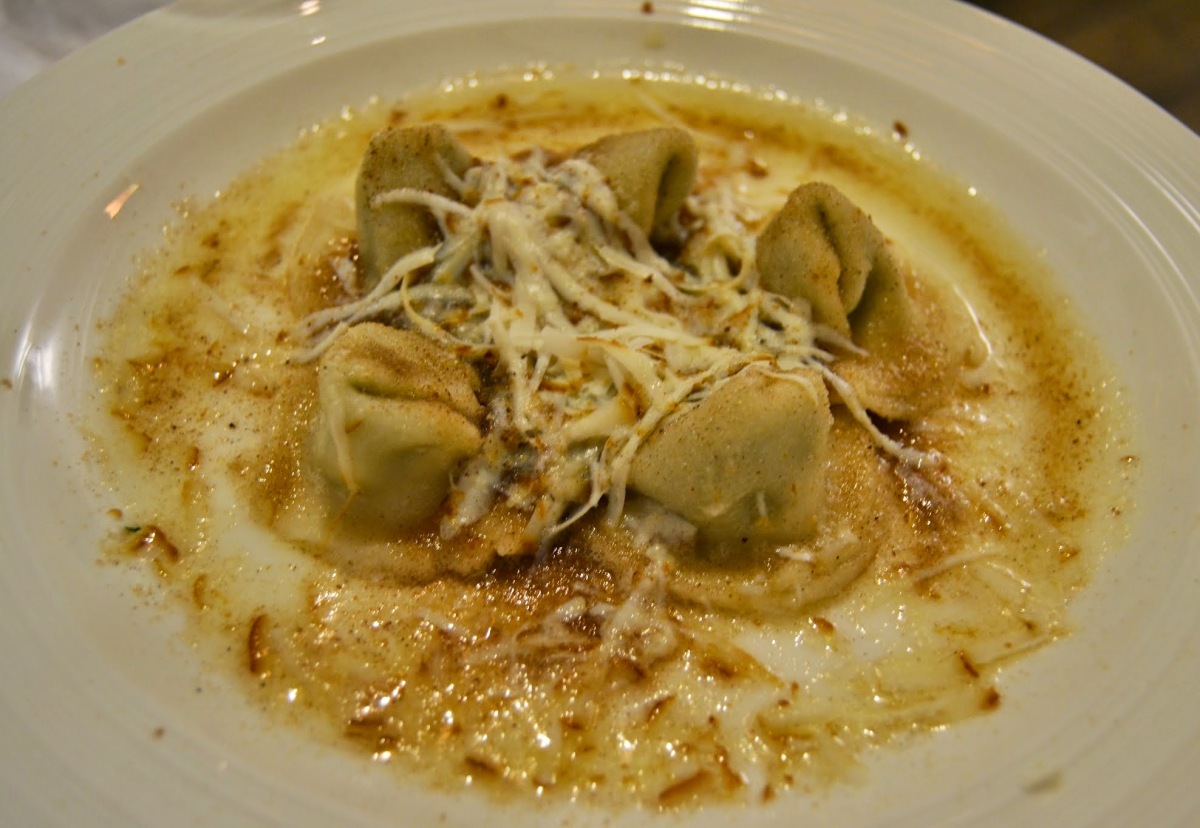 Oggi (near Piazzo San Giacomo), serves up real good homemade gelato. They also have a fountain of chocolate to sprinkle onto their cones before serving. 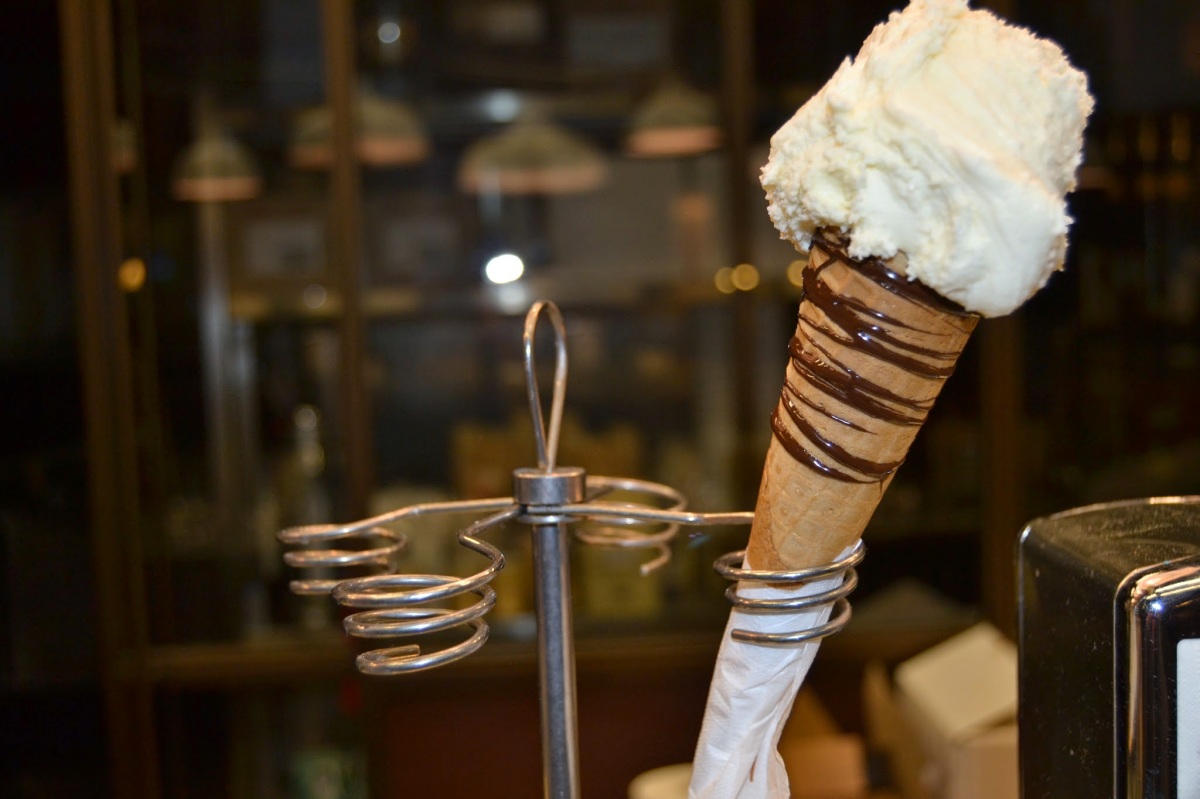 Udine sits under the Dolomites. They are very present, except on the cloudy days, when they become invisible but always palpable. 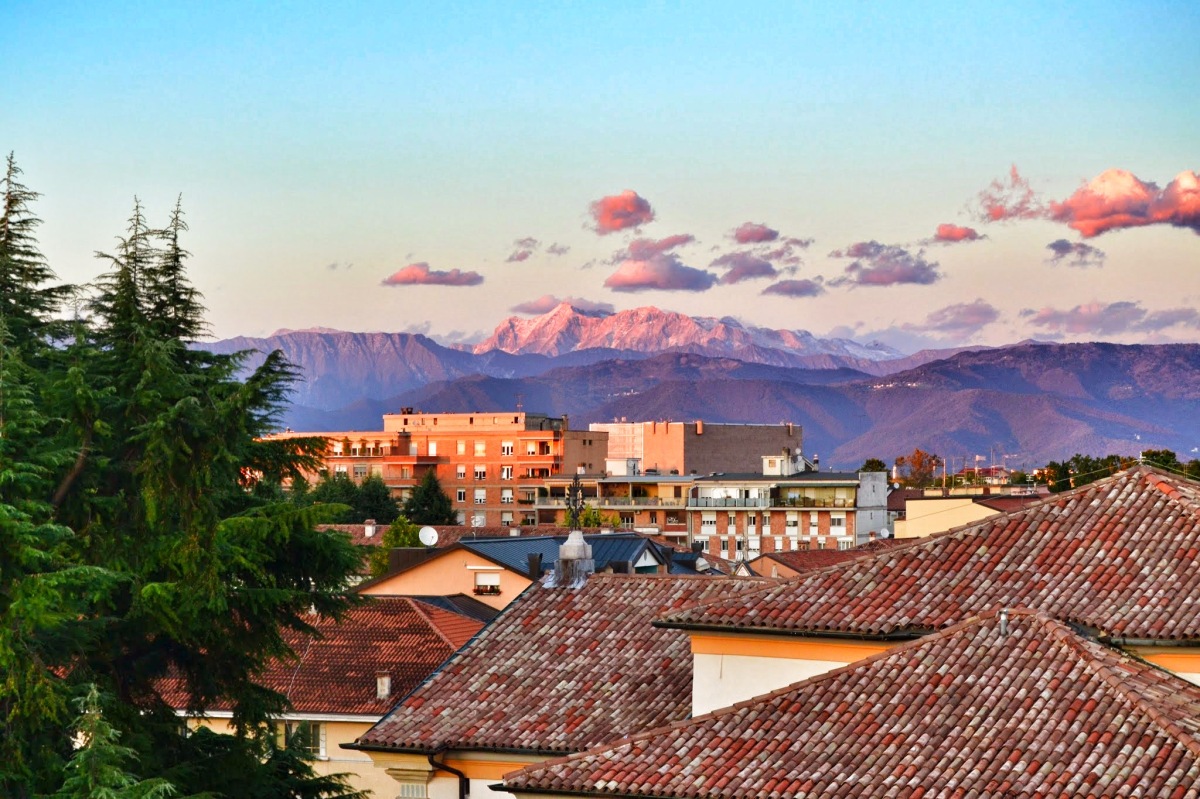