The shared New Year’s Celebration of Thailand, Cambodia and Laos in mid-April is water fueled mayhem and renewed spirituality. It signifies the washing away of the past, and being clean for the next year. It’s a time to clean your Buddha and ignore the trash outside. A time to burn incense and drink BeerLao. A time to sing and dance…at 6:00am. My guesthouse Mama, took us to the first day of the water festival to partake of Buddha washing. I found some of their faces (esp. kids) stern and kind in a simulacrum of a young, suspicious Buddha. 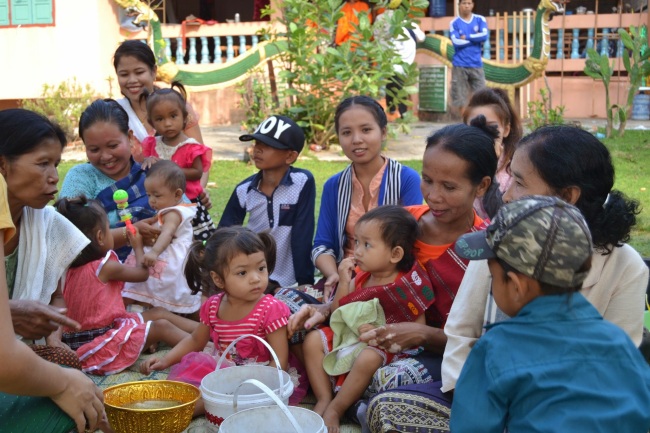 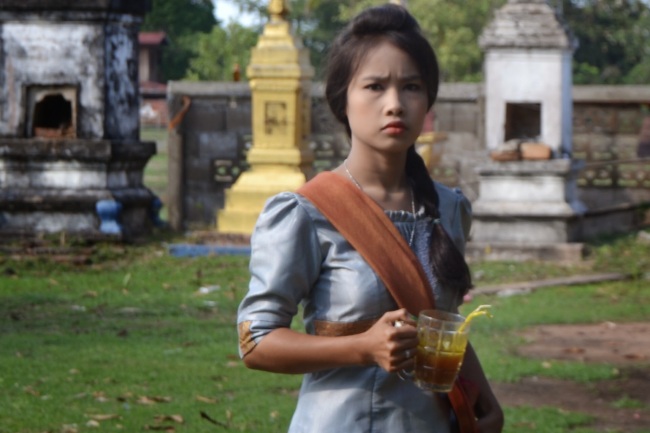 The Mekong, “mother of rivers,” emerald in dry, murkish brown in wet season, slow and surely winding from the high steppes of Tibet down through the green mountains of Indochina before spreading in the fertile alluvial plains of Vietnam felt mystical. It holds a place of honor among rivers as being the scene of a famous movie, Apocalypse Now, much better than the Amazon’s with Anaconda. At the border of Laos and Vietnam, the Mekong, stretches into a 14 km wide mass. Along the fault lines of this throbbing aquatic expansion lie some amazing waterfalls. I visited one on the nearby island of Don Khon, where we could safely swim in the circular current of a random bay. 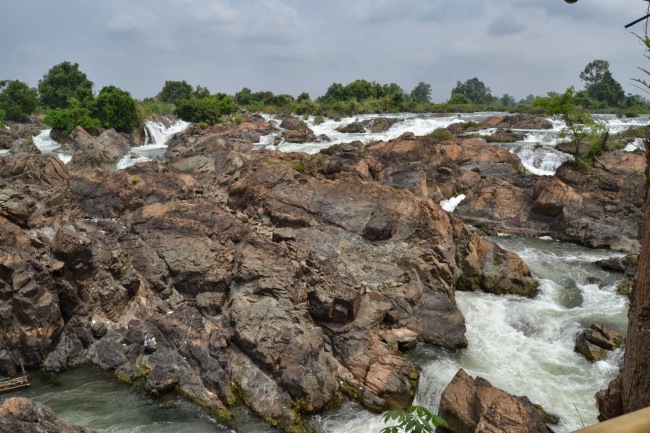 At the tip of Don Det, the loading area for passengers and motorbikes being transported to other islands, sits the small sandy area, well-polluted with bottlecaps, cig butts, and plastic bottles, generously called a beach. On this particular Tuesday, there was a funny, curious puppy who liked to steal one poor Canadian girl’s sandals and run. We all watched our free canine entertainment, soaked in sun, treaded water against the current and enjoyed the sunset among new acquaintances. 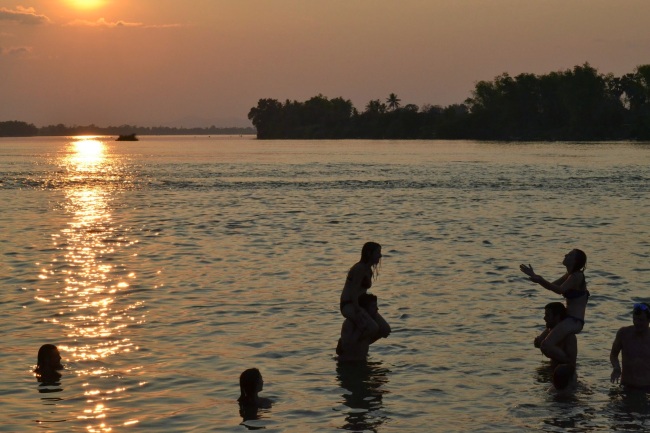 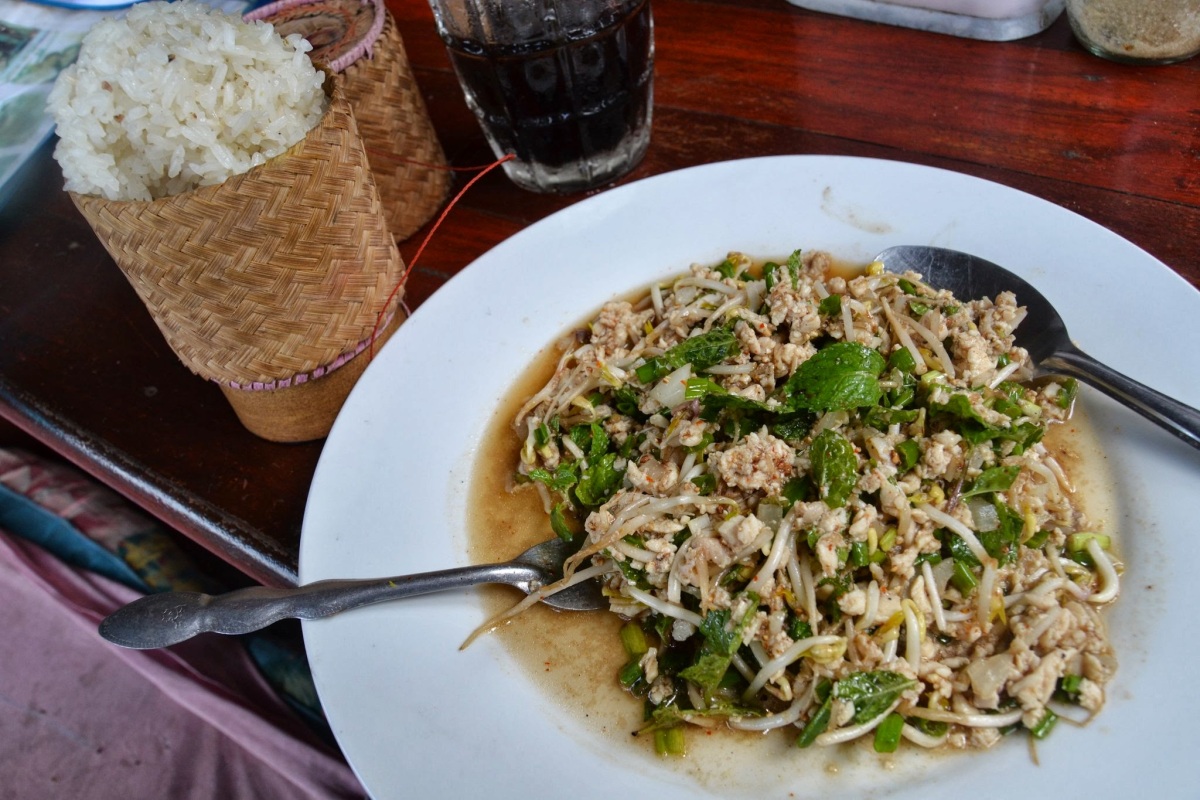 Don Det’s tiny enclave of roosting chicken houses, dirt piles for lazy dogs and fish bones for surly cats also produces some chill opportunities to its human inhabitants too. I got lucky and stumbled upon a man for whom the word t-shirt has lost all meaning. It’s as if his body has become resistant to cottons and polyesters. His shaved head born from indifference of trends, his cutoff jean shorts not worn ironically, his feet having long ago merged with the dirt were unprotected, Darren had become of the island. He was “busy” repairing a fence for The Street View Cafe when I found him. I had just had another mediocre burger recently and after responding to his  “How ya goin mate?” with an “Aight” of my own, I hinted at his aptitude for making good hamburgers, and being received with an enthusiastic affirmation, I ordered one. It was great. His Laotian wife cooks all his recipes and the good music, decent wi-fi and green atmosphere provided a small haven for me. If you notice, all the food has been shuffled and mostly eaten, each being somehow more comfort laden than the last. Fair Dinkum. 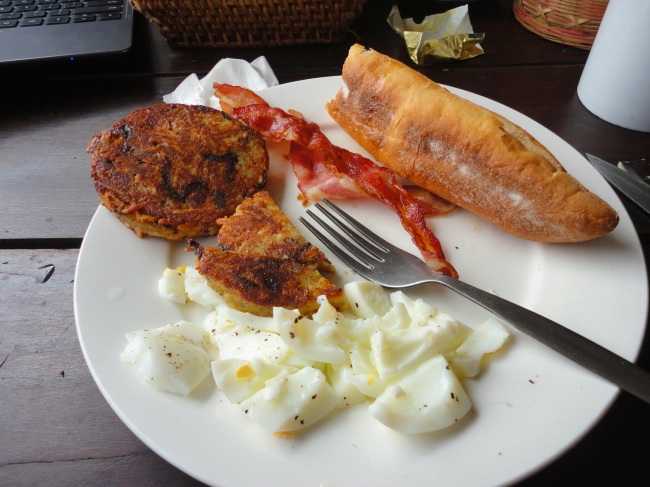 Nice Brekkie! Hash browns were so dense, I had to use a knife, bacon al dente.

Pepper added by me. Chicken schnitzel was not dry, but aided immensely by the chili sauce.

There was another bar down towards the beach, Adam’s, that offered a rare service. They can upload movies, music, books etc to whatever electronics or USB’s you have. They also had a famous “pumpkin burger.” It’s thick and full of flavor, and vegetarian friendly, until I added bacon and cheese. With home-made onion rings. 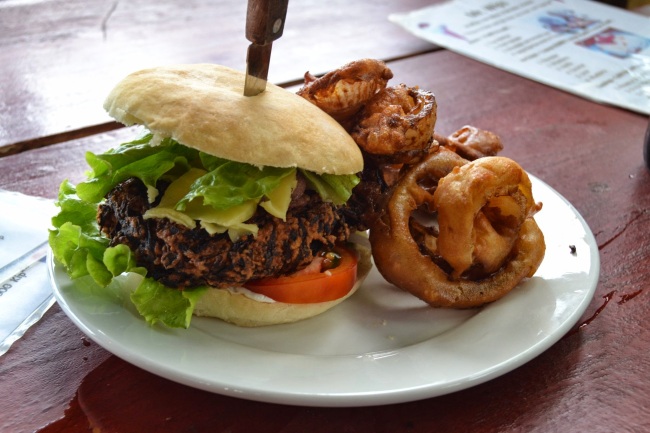 My small cabin where I stayed for 5 days, rented to me for only 20,000 kip (<3US$/day). Mama Piang’s had good beds, with mosquito nets, squat toilets and loud neighbors who impatiently start the day seemingly before the sun. She cooks good curries and Laos’ famous dish, Laap. Sticky as glue rice, dipped into the saucy meat and bean sprout mix. 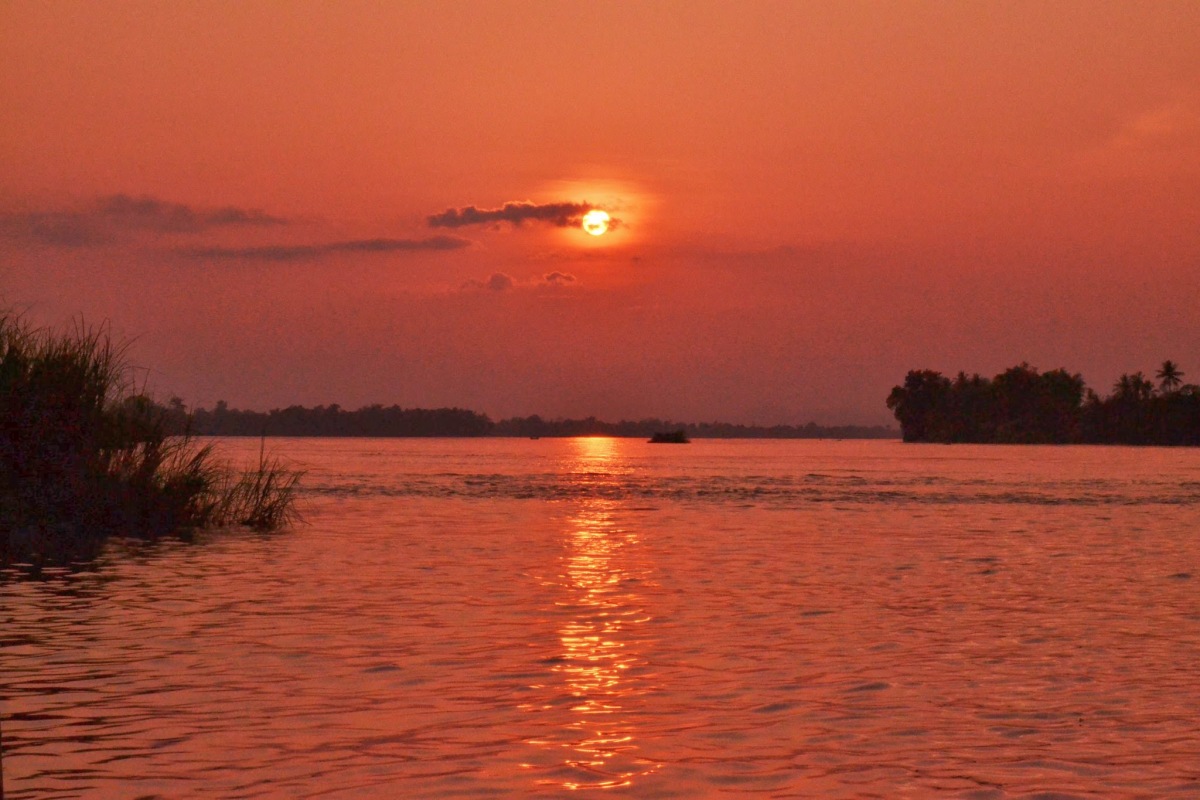 Sunsets in color and one without. 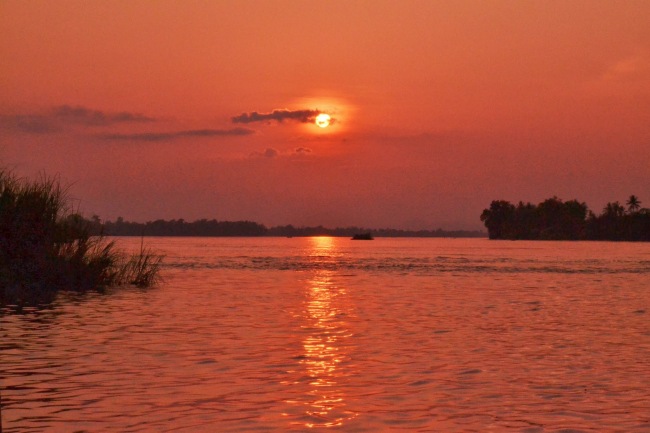 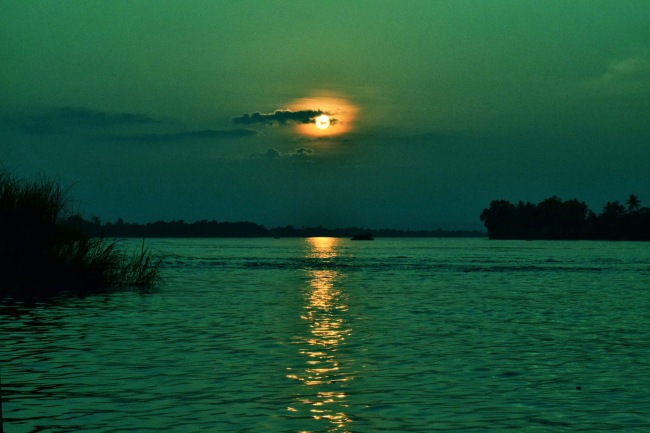 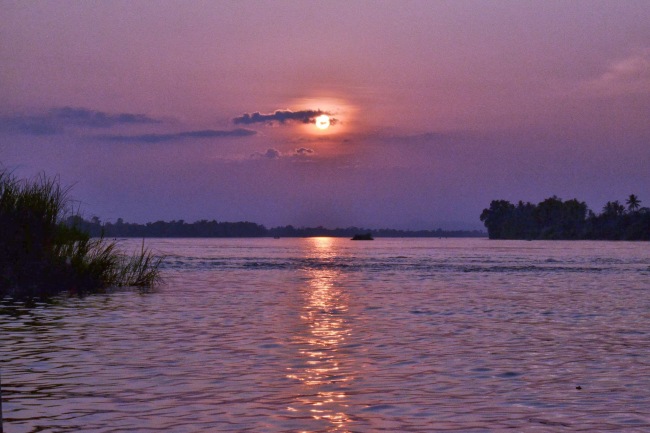 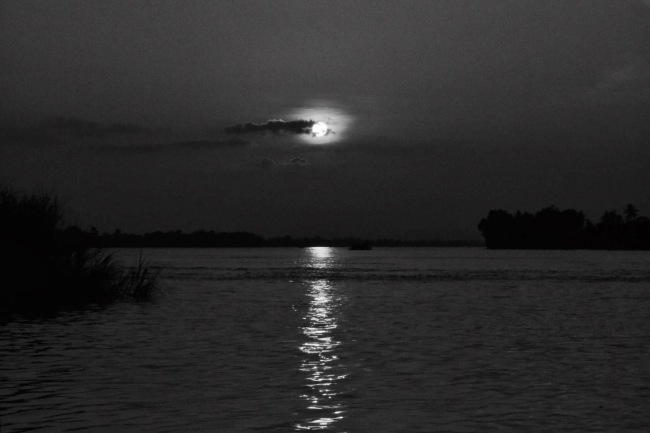 No caption photography on Wednesday.