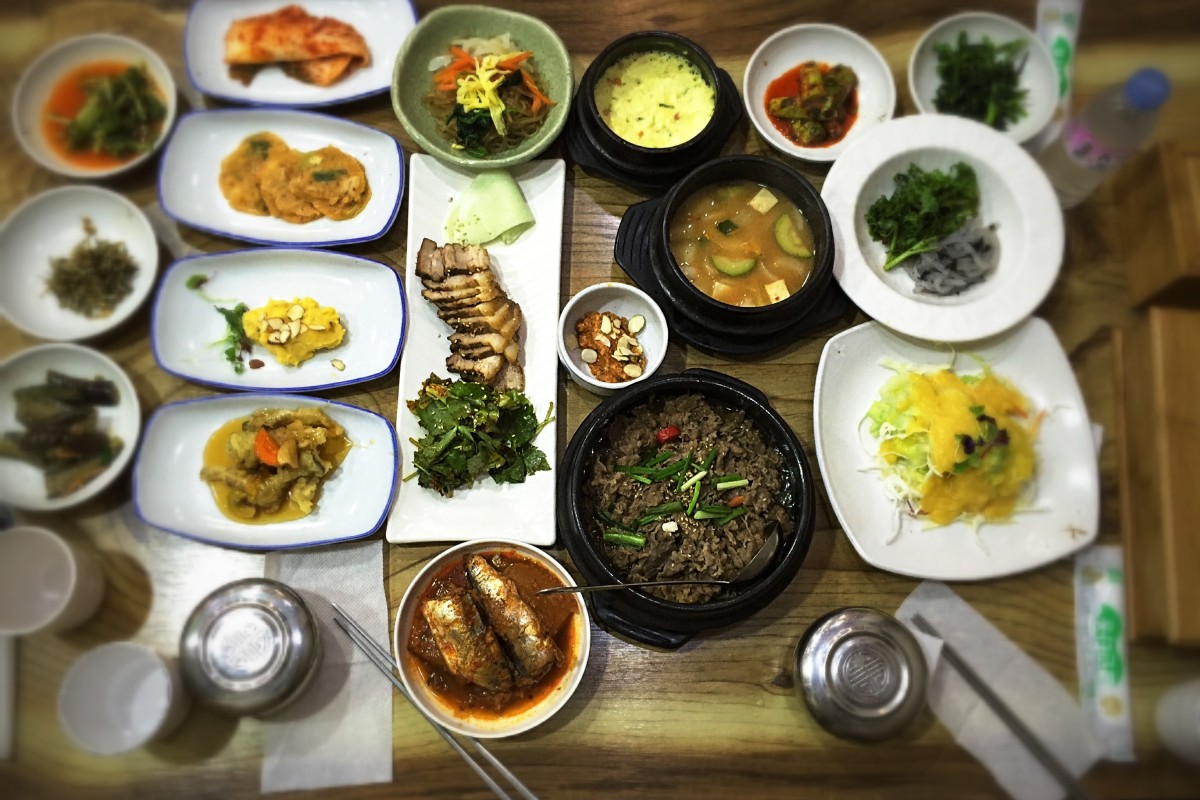 Summer is heating up, cold, crappy Korean beers are chilling and the spices are never lacking in Korea. Only one beach trip this month, but hopefully more to come. My overall consumption seems to wane in the summer, but my hunger for good eats never does. All the foods presented this month were pretty awesome. Let’s take a look!

First was a stop at a local Guri restaurant with constantly long weekend lines for the floor seating inside. We ate a big plate of fish, octopus and squid mixed among bean sprouts and spicy sauce, a delicate fish soup and some real nice 만두 dumplings as well as plenty of side dishes. 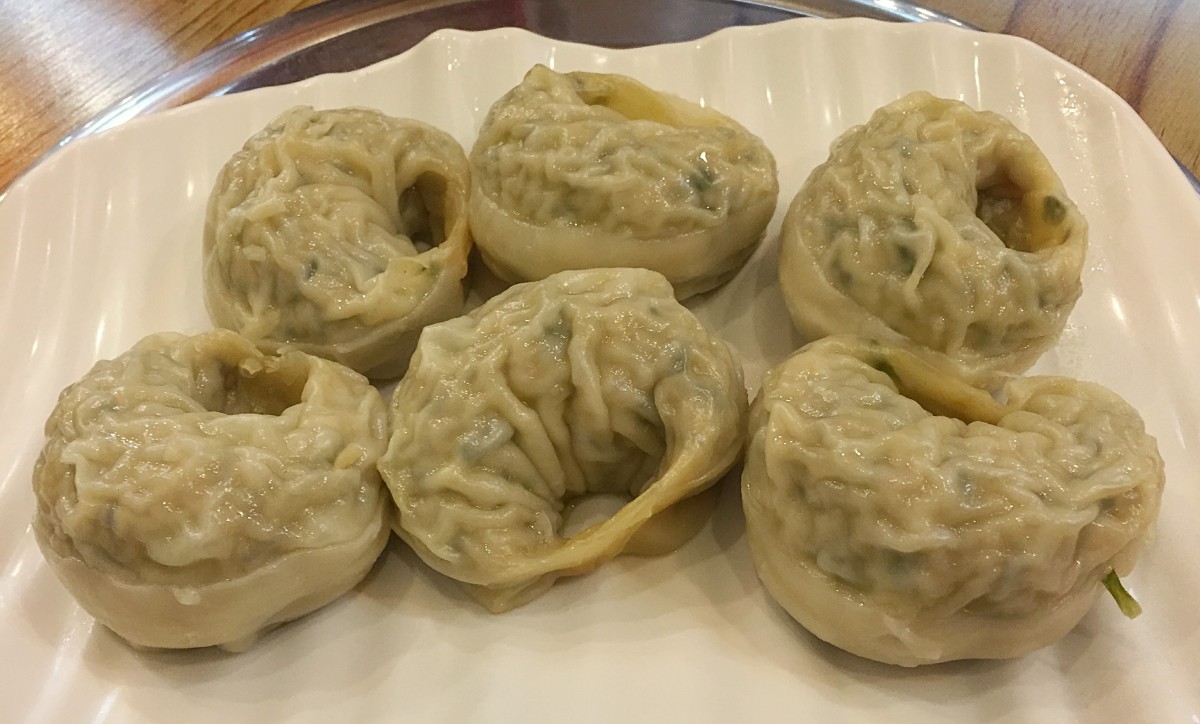 It was time to get salty. Jordyn and I headed to the East Sea at Gangneung. We left Seoul in the early evening and caught a rice field sunset while driving the back roads. At the beach, the water was wicked cold but clean. We had a big meal of dried fish, tofu soup and rice wine 막걸리 for Saturday night, burgers for breakfast and a nice round of spicy ramen 라면 noodles by the beach before heading home. 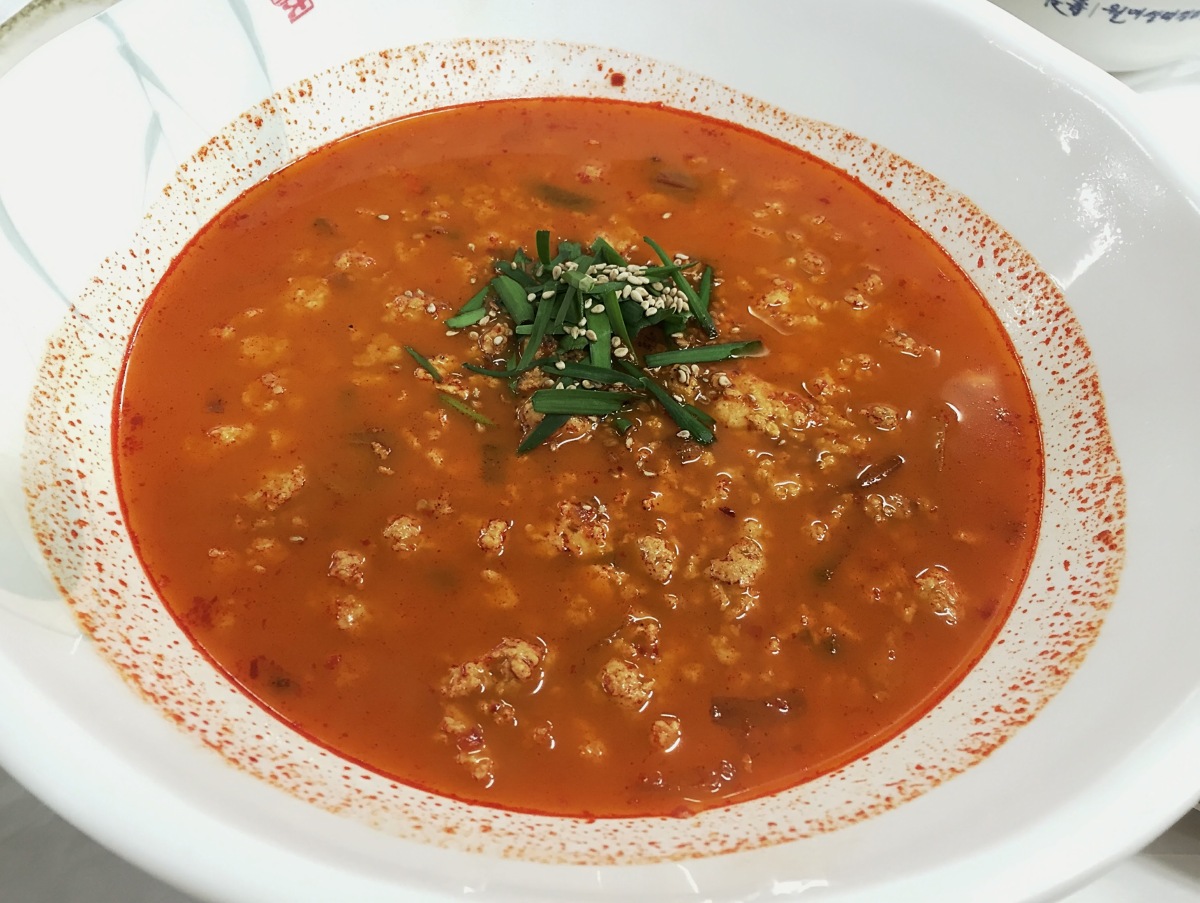 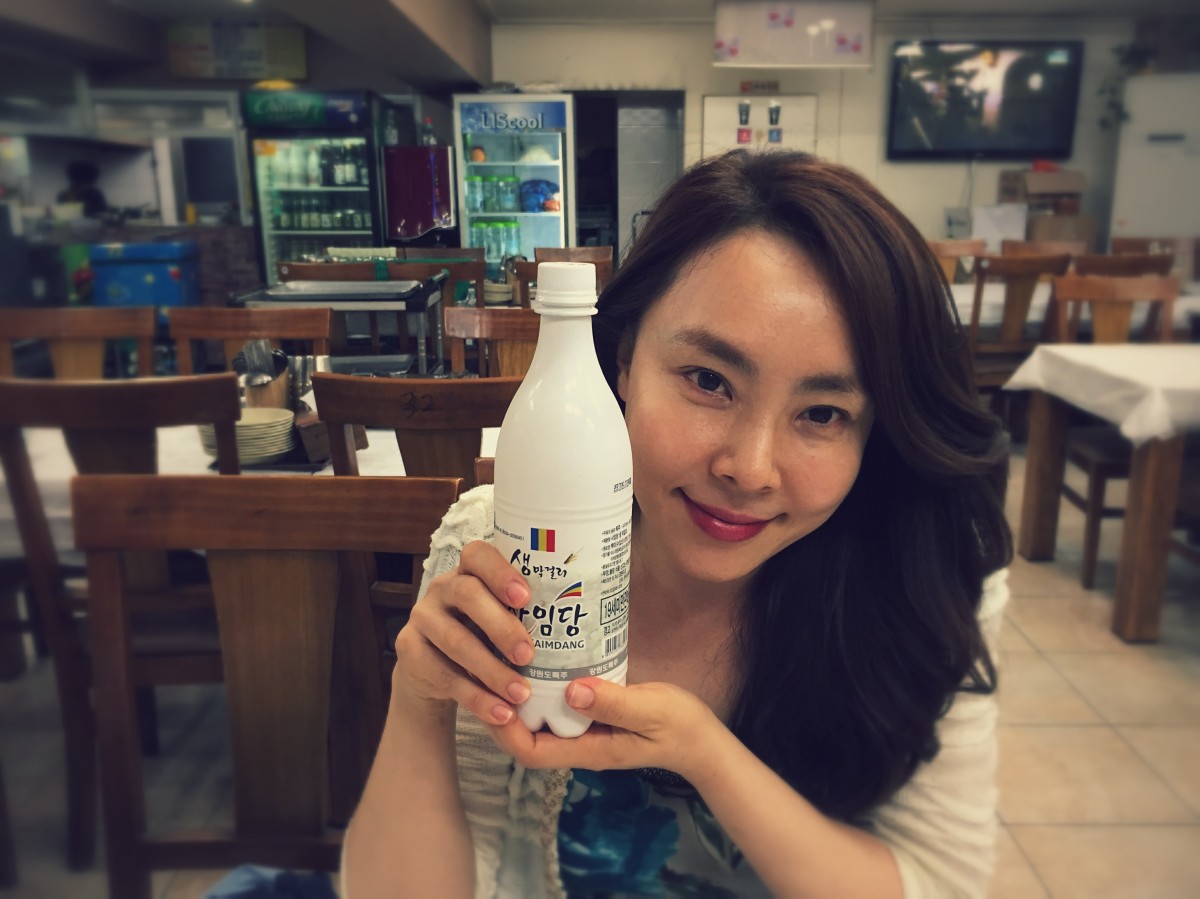 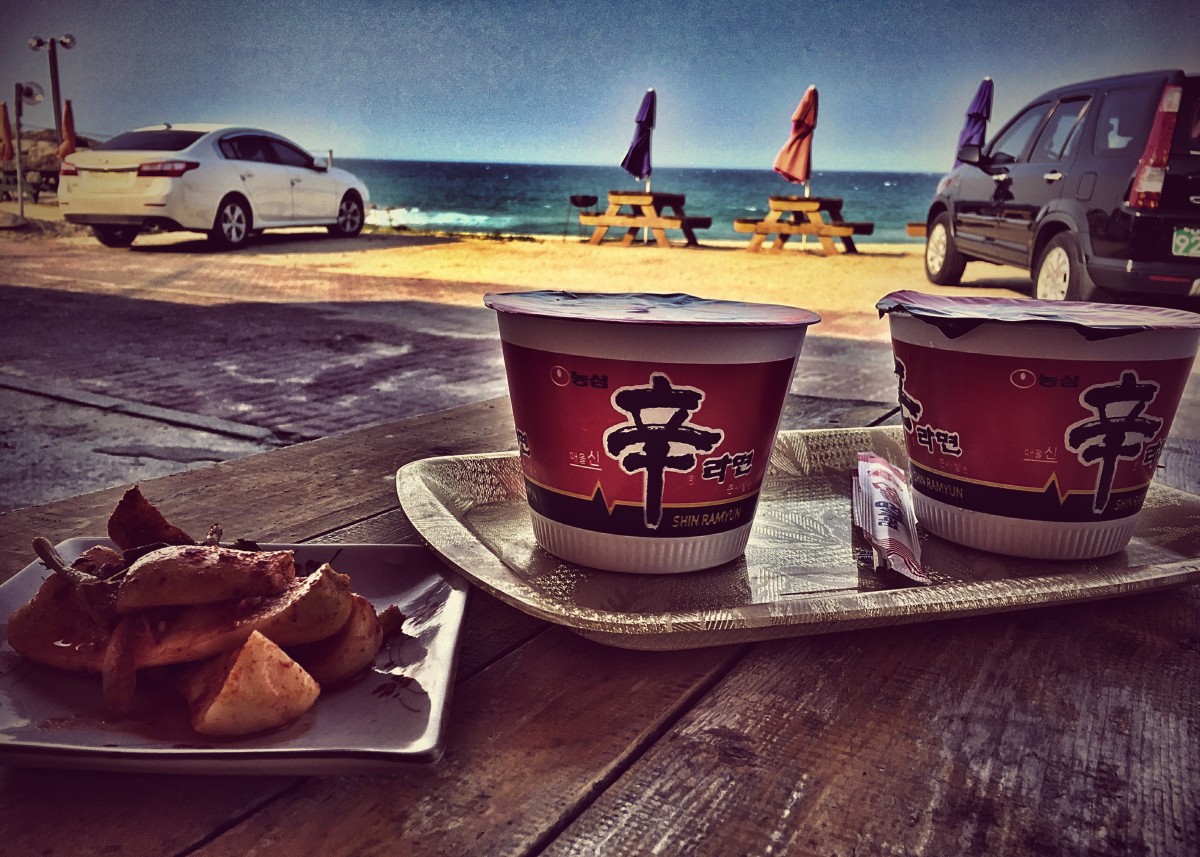 Two soups, both alike in dignity, in fair Korea, where I lay my spoon… The first is red and spicy, the second is cool and refreshing. Gukbap 국밥 is meat soup with bean sprouts and Naengmyeon 냉면 is chilled noodles with a slightly vinegary broth. 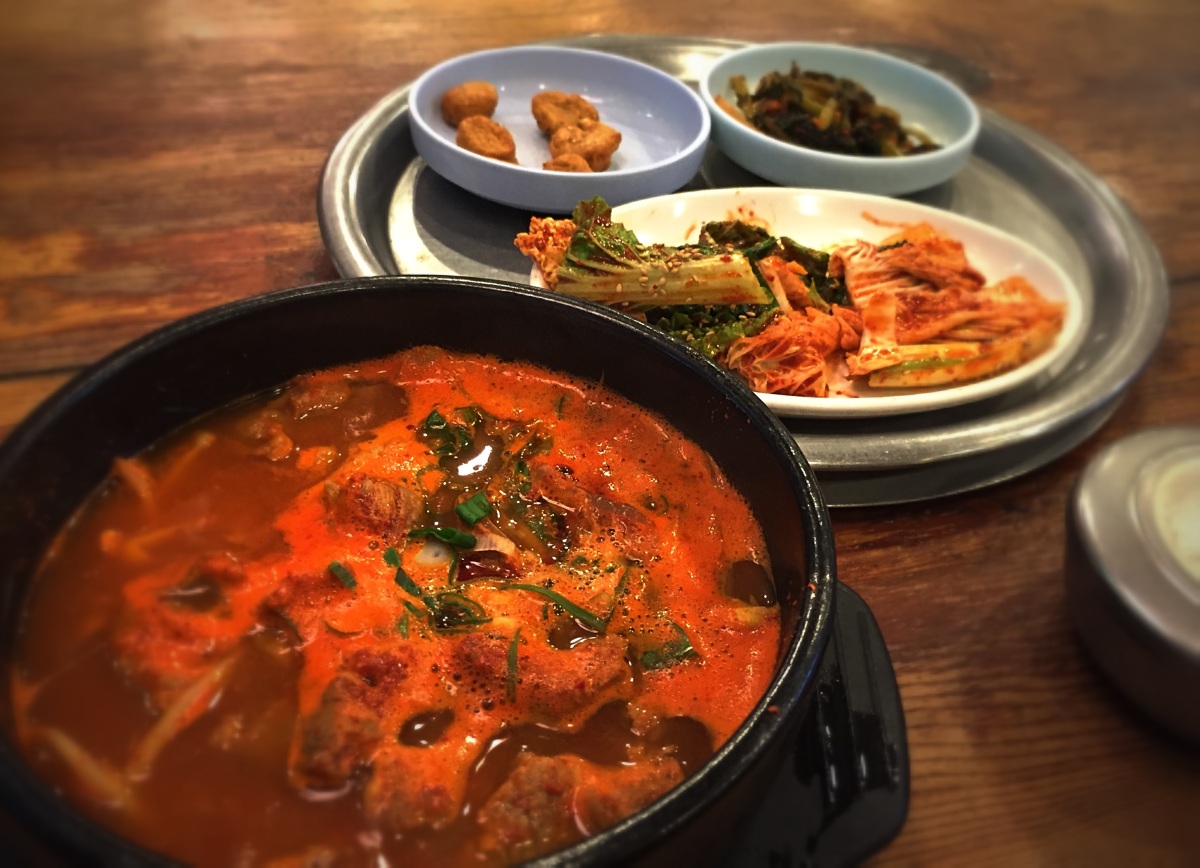 During the MERS scare, the lines at Korean theme parks thinned out, so we headed to a water park called Ocean World about 100km from Seoul. There are plenty of good slides and lots of people wearing lots of clothes while swimming. After making the kids wait for their dinner instead of snacking on overpriced theme park food, they were in a hangry mood by the time we got to the BBQ place, and I needed a beer. The wait was worth it! We sampled the chicken, pork and beef, and all were satisfied. 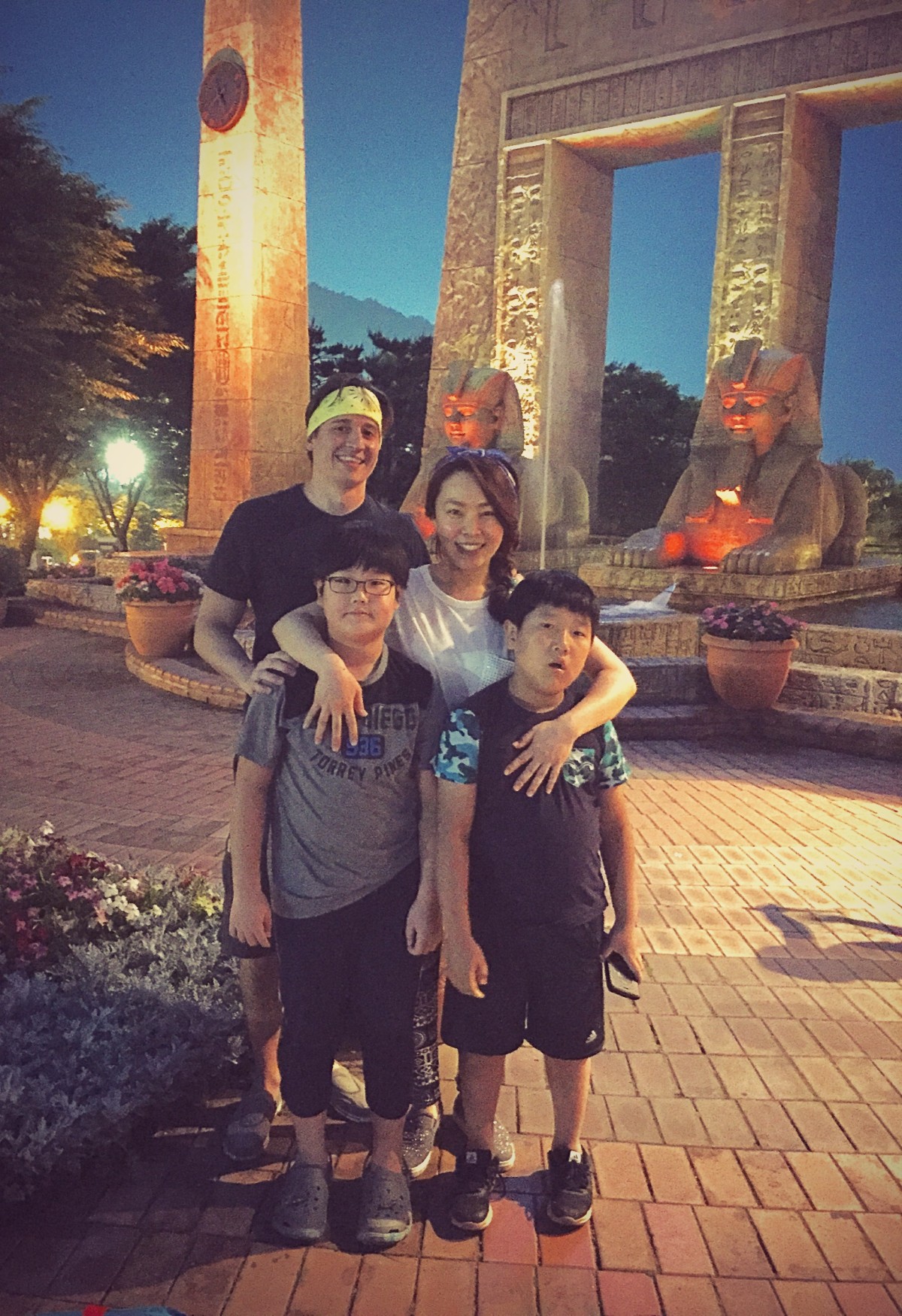 Before we got to the water park, we filled up on all-you-can-eat donkasu 도까스 at a little roadside eatery. The place was full of kitschy Americana artifacts and I ate 5 pieces of fried pork for about 9$.

There was an art exhibit featuring Mark Rothko at the Seoul Arts Center (Hangaram), and his paintings are evocative via simplicity and powered by deep colors. Jordyn felt sad that his last painting before suicide was all red.

Craving Mexican food in Korea is a struggle I understand too well here. Unless you can brave the 3 hour wait for Vatos, you’re forced into a generic world of poor Tex-Mex. Enter: On The Border, Korea’s chain restaurant for expensive burritos and imitation cheese. It fills but doesn’t satisfy the craving.

Anthony Bourdain recently popped by Korea to tape his Places Unknown special and raved about the next item. It’s called budaejiggae 부대찌개 and means “army soup.” During the Korean war, poverty was rampant except for the American army bases. Therefore, the food runoff of beans, ramen and cheap meat ran downhill into a big pot of kimchi. The Koreans cooked it and we have this delicious mess:

After walking the dogs in the rose garden, we stopped in for lunch on a hot Saturday at a little tofu shop in Guri, and had some rather bland noodles, frozen seafood soup and really fresh and tasty tofu.

Now, here is the dichotomy of a king’s meal vs. a student’s meal. The plethora of side dishes vs. rice cake and assorted fried things.

After a day swimming in the northern Han River, we ate some of the local river creatures–eel. It’s such a delicacy and a pleasingly different protein. Finished off by a rice bibimbap 비빔밥. 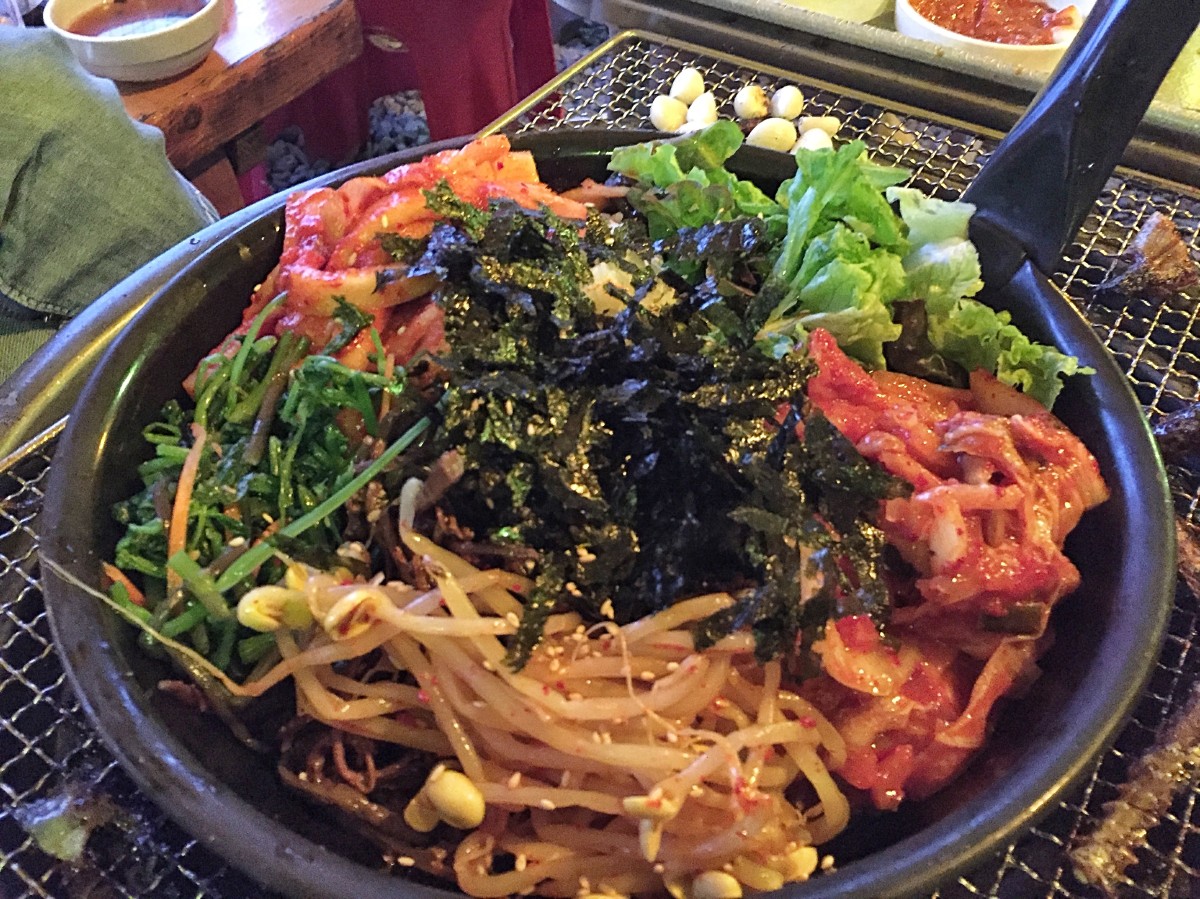 See you in July! Happy E.A.T.ing