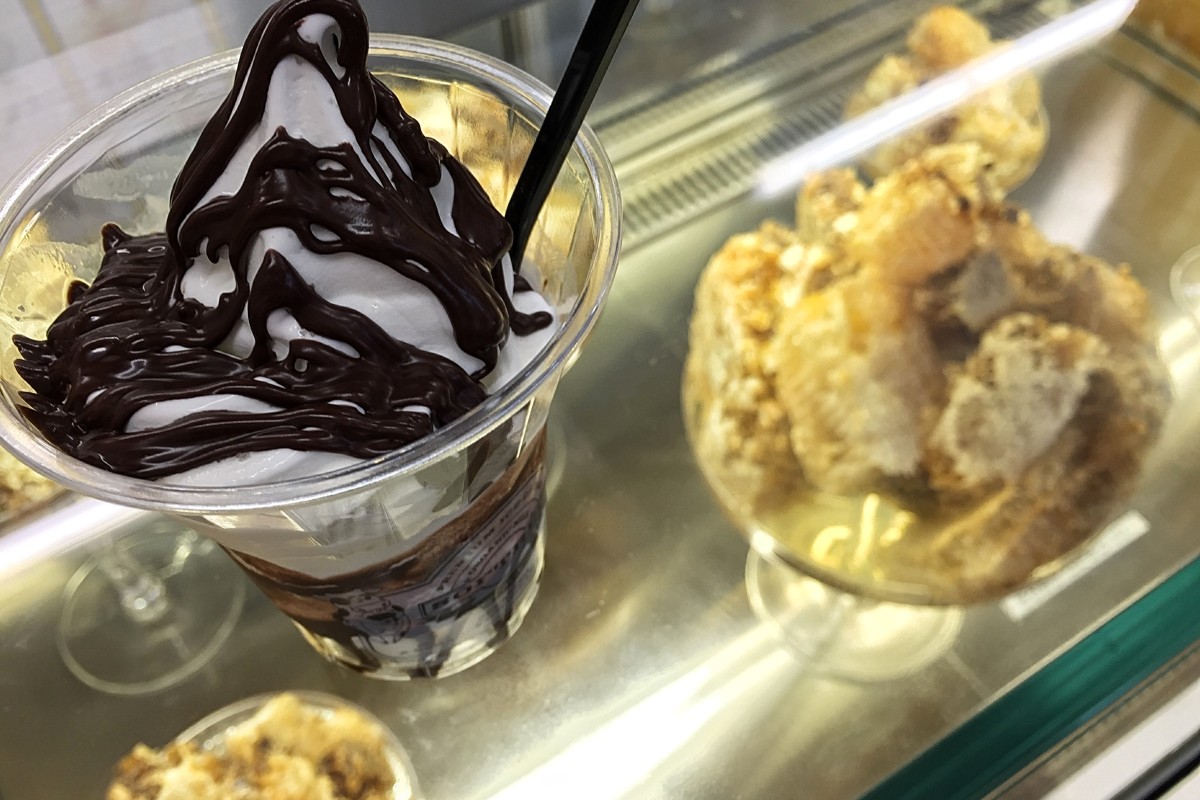 May brought high temperatures and a warning of early summer to Seoul. The beach started calling to me by the second weekend. The seasons move along quickly here in Korea, so I expect to get my salty ocean tan as soon as possible. Here’s some highlights from this month’s toothsome delights.

These fried meat nuggets with Greek yogurt sauce were more appetizing to the eyes than the stomach. Found on the streets of Myeong-dong, the meat seemed too squishy and barely cooked inside. 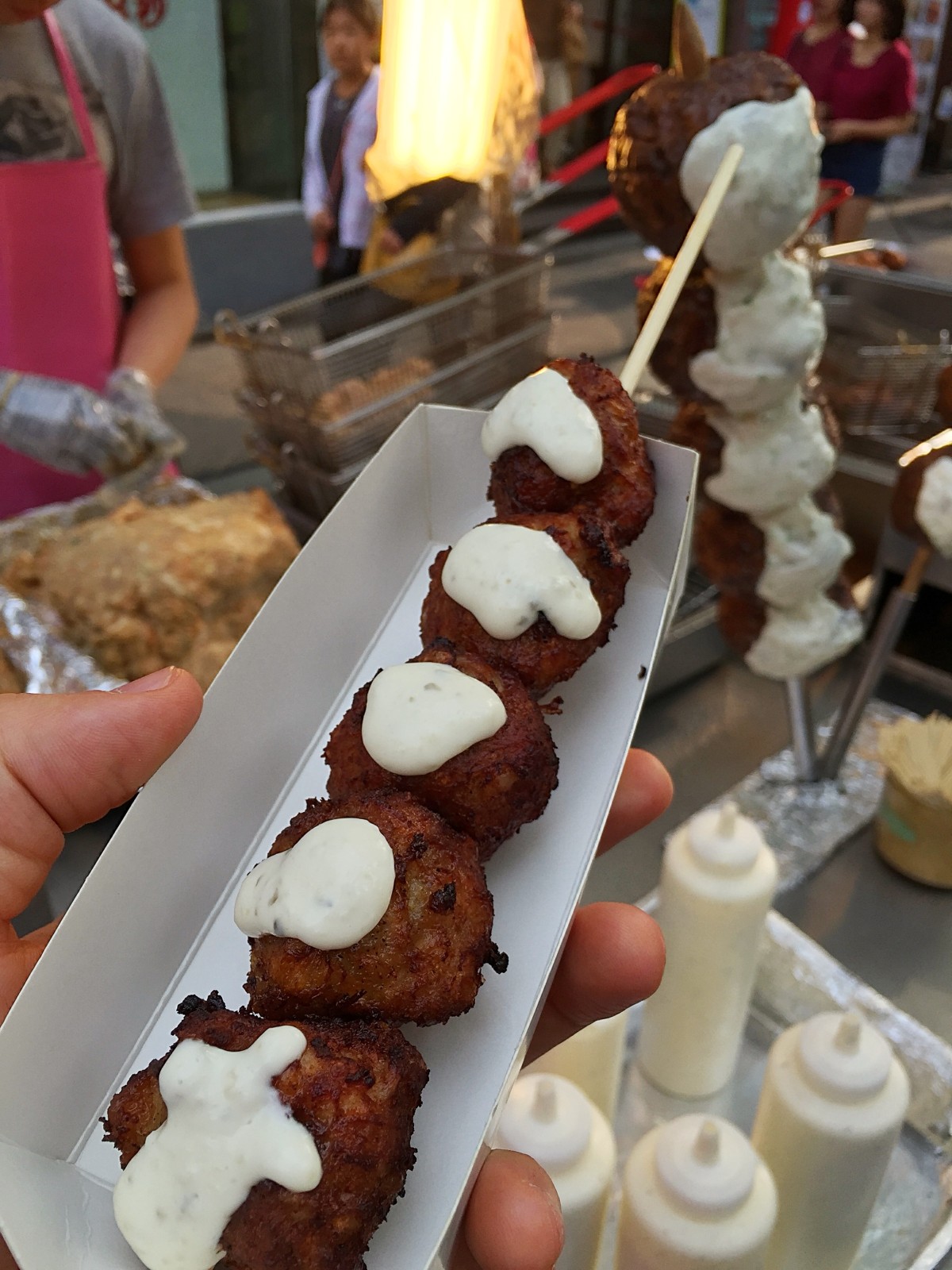 Who doesn’t need a bosom or belly pack to tighten up those ever so crucial parts? The lady is holding character masks. You can look like a raccoon while beautifying.

This was some of the best chicken I’ve eaten in Korea. The 삼계탕 (chicken soup) was real clean and flavorful too. It’s a two level place right in the heart of Myeong-dong and one of the first fried chicken restaurants in the area according to all the black and white wall hangings. 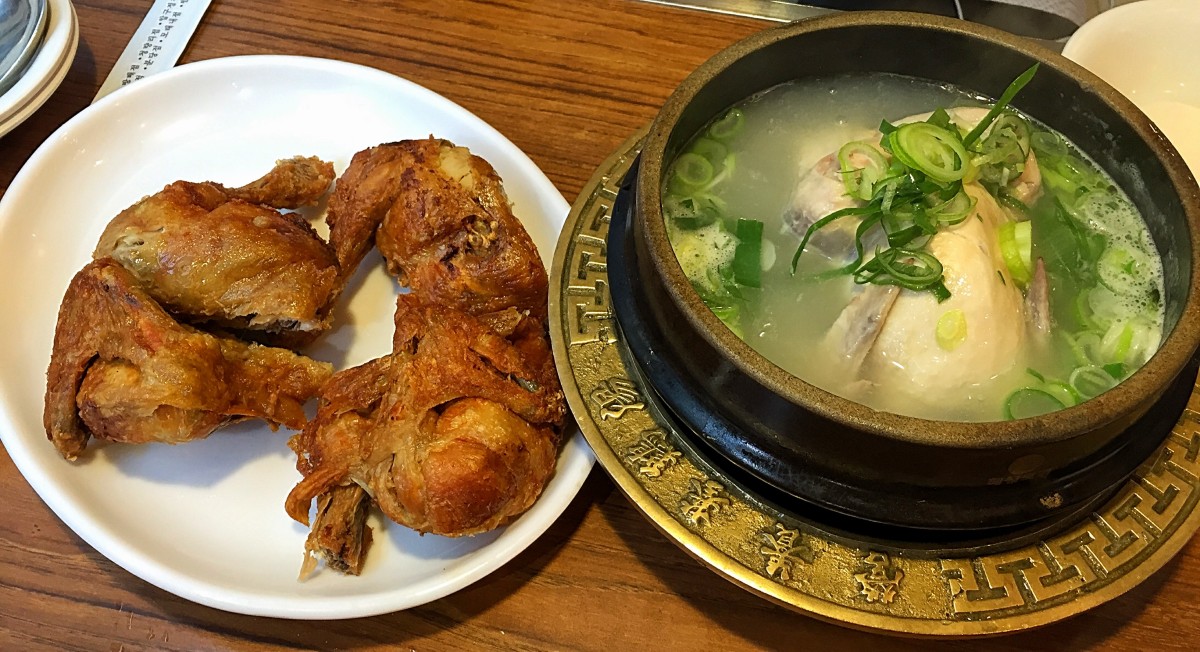 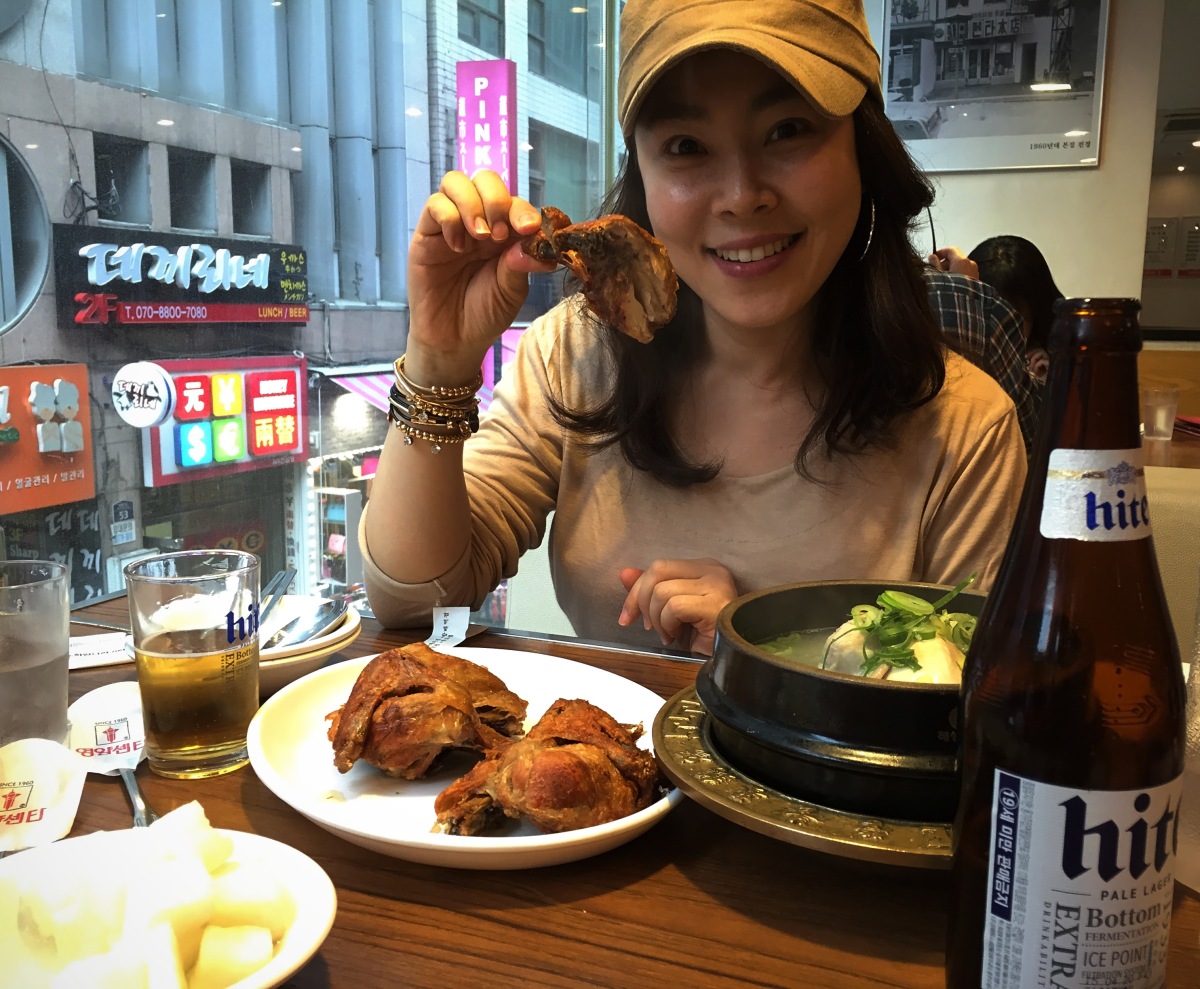 Let’s get the junk food out of the way first. There was quite a bit this month.

This donkatsu from Donkasu Club (돈까수크럽) was bigger than my face, average taste and reasonably priced at 9$. Miraculously, they had a TV that was playing the Mayweather-Pacquiao fight. People kept looking at me when I audibly tensed after a combination.

A random burrito at Grill 5 (replete with corn of course) near Jong-no. 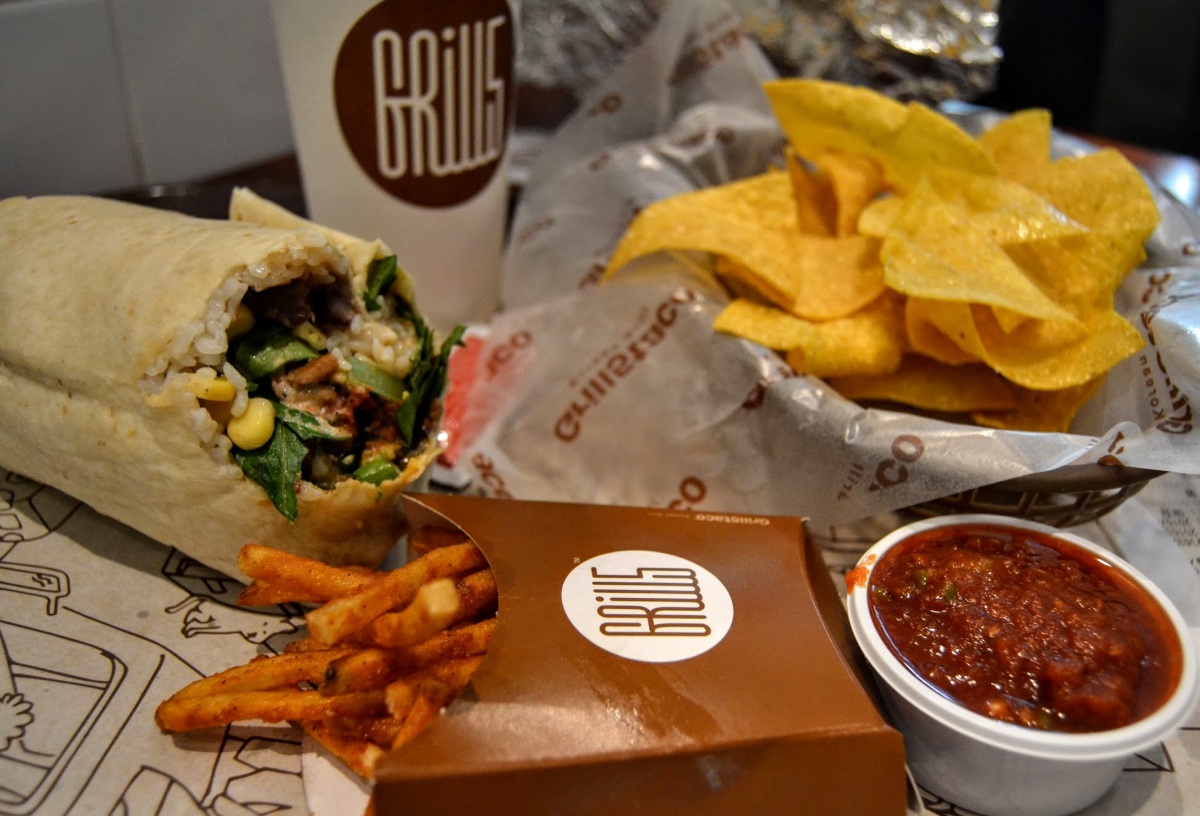 I found myself at the Osan Air Base 50 miles south of Seoul and went crazy for the fast food. Here we see a Charley’s cheesesteak, Italian hoagie wraps, bacon cheese fries and peach juice. Missing from the picture are the four varieties of Taco Bell taco, three pan pizzas and curly fries. Of course I end up overeating in America! I went to the bathroom and found that the urinals, wash basins and baby changing tables all looked familiar. Everything was fitted out by the classic American companies and flown over. It’s weird to recognize a bathroom.

Yeah, they have Dominos here in Korea. And yeah, I’m still a sucker for a it. I like the lack of corn. Is it bad that living in Italy trained me to eat an entire pizza by myself? 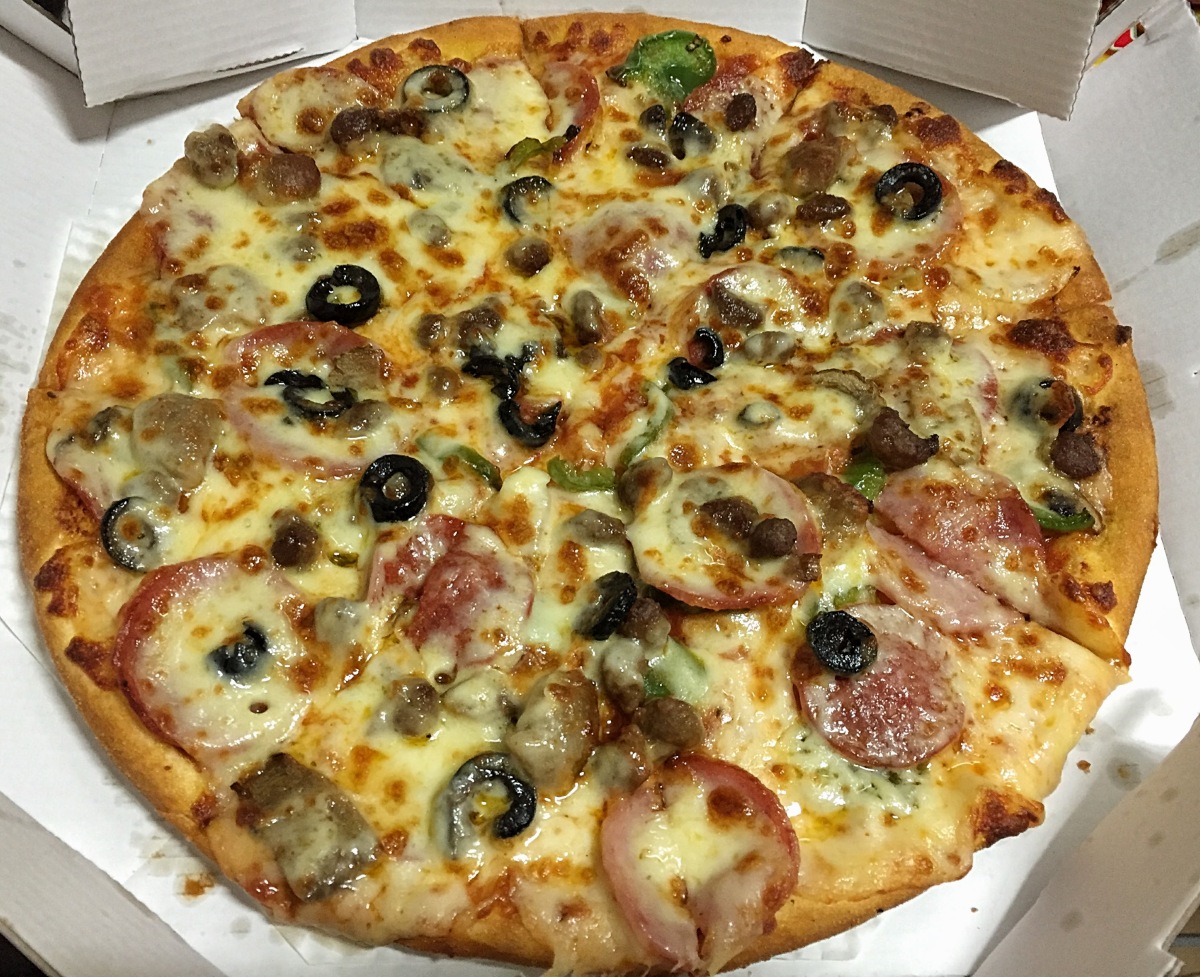 This is no junk food. This is  the C.R.E.A.M burger at Brooklyn Burger (located next to COEX Mall, on the temple side street). You might recognize it from last month‘s post. It’s such a badass burger and my only complaint is that they don’t have an extra large size option. Sweet potato fries weren’t anything special, I’ll stick with the regular potato. 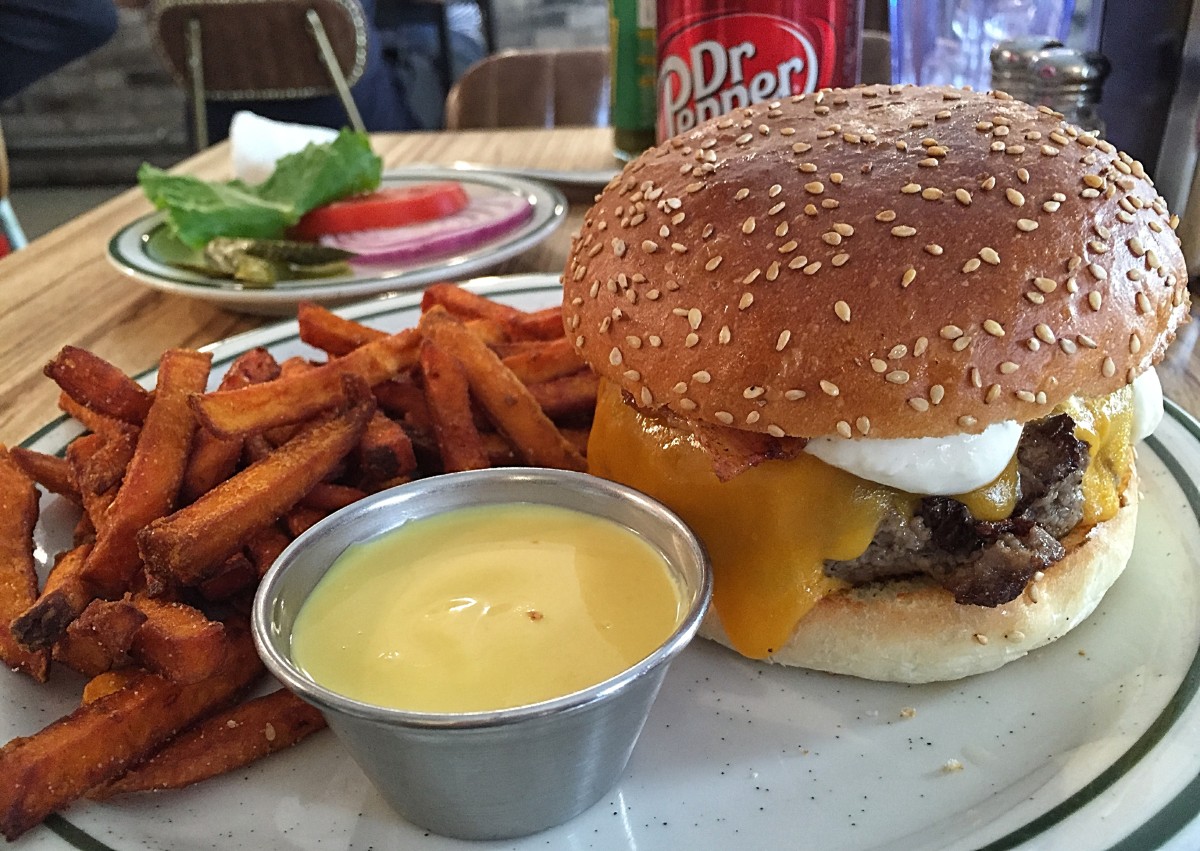 My favorite lasagna of all time. It’s served at the Italian Club Sunday Brunch hosted by a small Franciscan Church/Kindergarten in Hannam-dong for Italian diplomats, their children and anyone interested in good food. Every Sunday, Italiano can be heard in the basement between sips of caffè and bites of amazing food. The blueberry panna cotta is served “no frills” style on plastic plates. 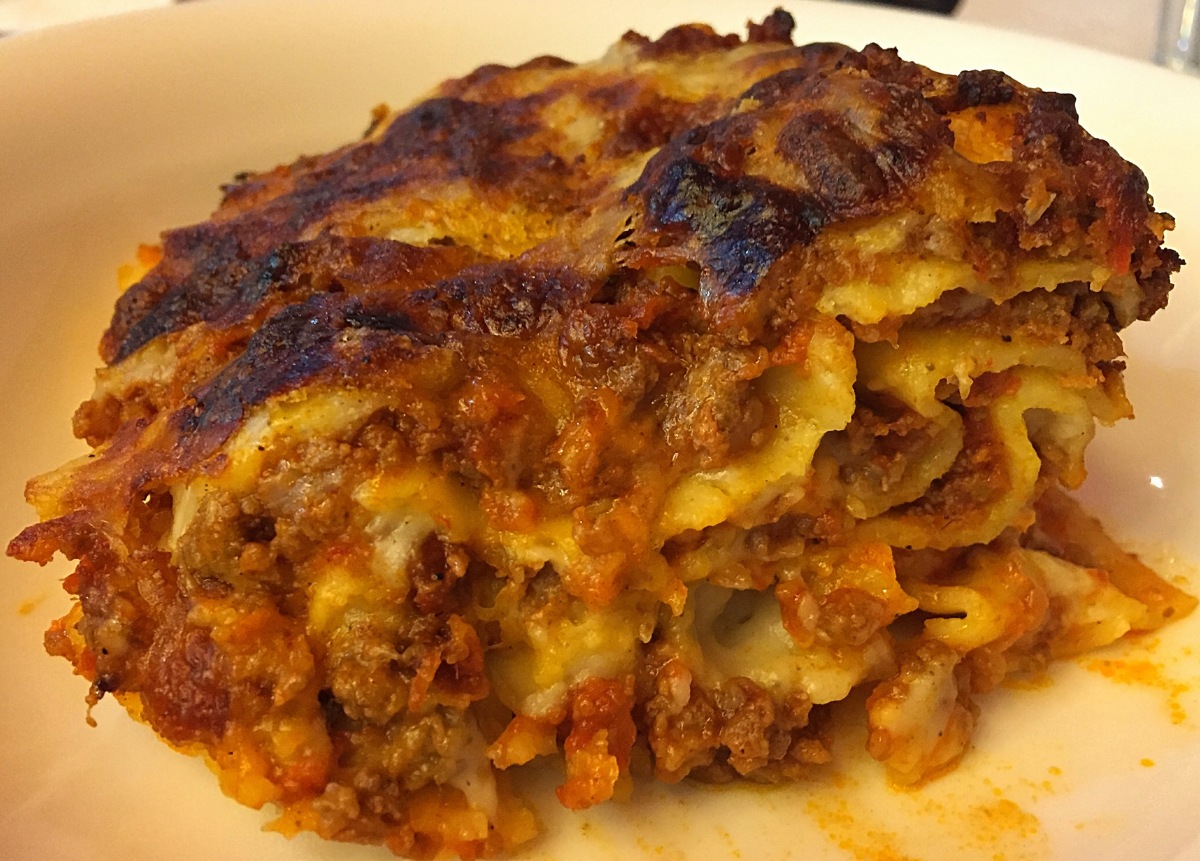 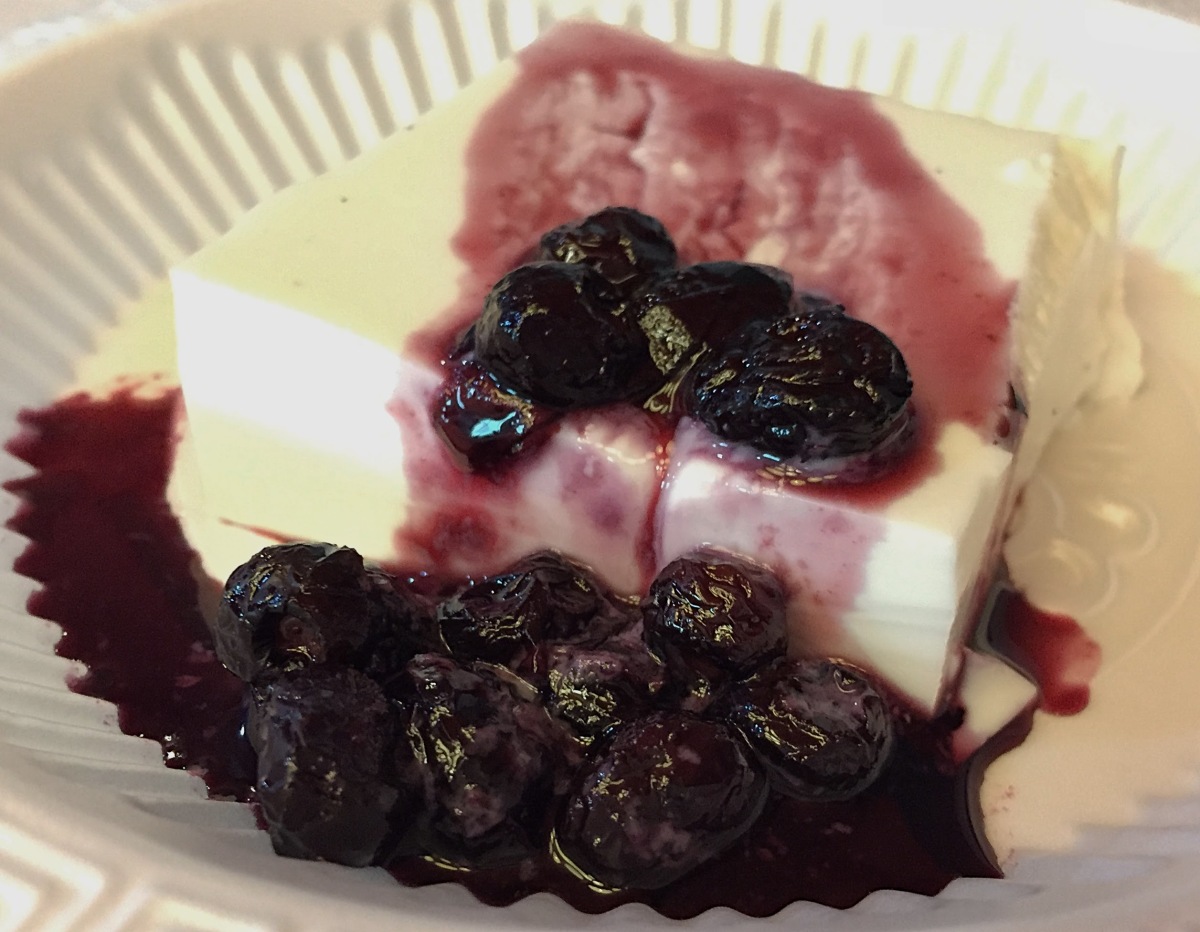 After lunch, we walked around Itaewon to cool off our gullets and found this little soft serve joint, Softtree, and its ever-present line. You’ve seen this place in front of Itaewon Spa-land.

This is the always pleasurable 감자탕 (pork leg stew). It’s incredibly filling and the meat falls right off the bone.

These are two varieties of 곰탕 (oxtail soup) awesome 만두 (dumplings) and accompanying kimchi. It’s like roast beef in a thin broth with green onion (except for when it’s really good, there are beef chunks with the soft fat still attached). The first soup is from a little place close to Dongdaemun Gate, and the other pictures are a dynamite restaurant hidden on a hill in Namyang-ju near the furniture outlets.

A nice set menu of various 반찬 (side dishes) with bulgogi meat and BBQ too. The red plate of meat in the middle is raw, cold and delicious. 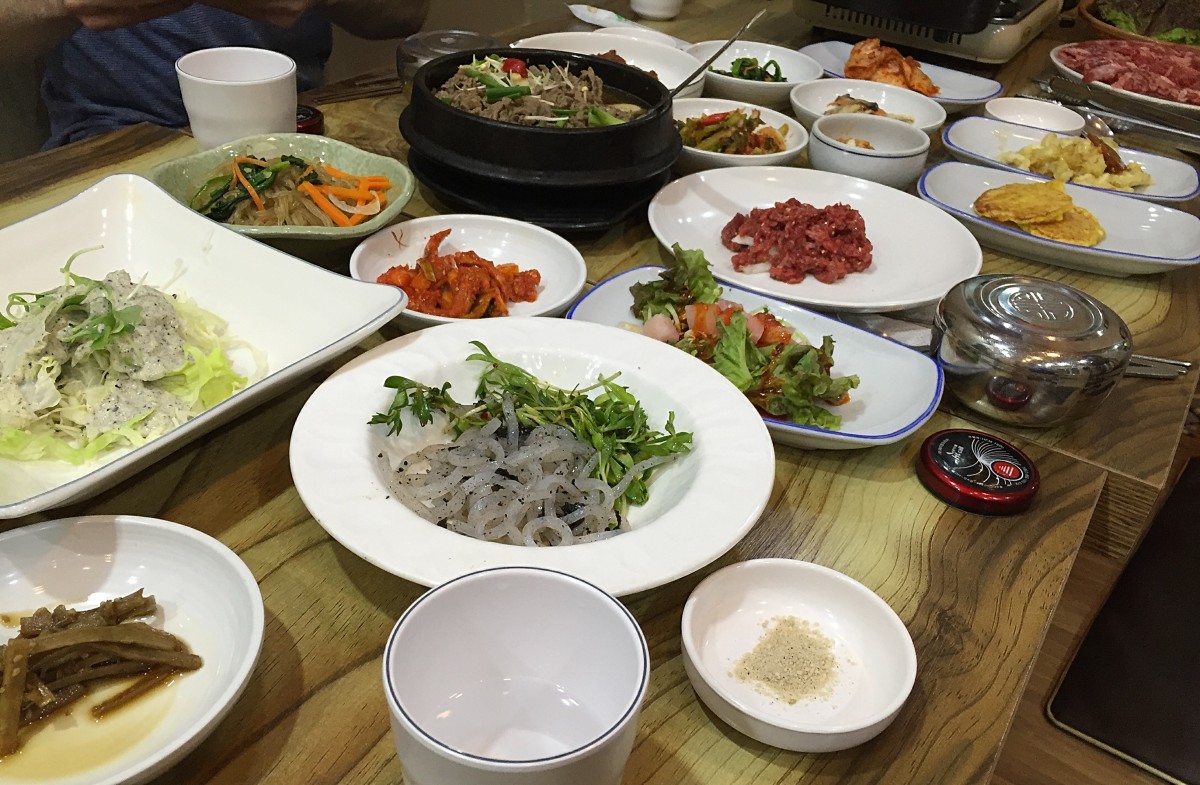 At Arirang BBQ in Guri-si, we find the before and after of wonderfully marinated meat hitting the flames, and the cold noodle soup called naengmyeon (넹면).

This is a local haunt on my street with good tofu, kimchi, tasty pork and plenty of cucumbers.

That spicy red soup is a playground of fire. The white fish is real nice, and the gills take some getting used to but are actually a pleasant texture, similar to al dente pasta. After such a crazy lunch, I wanted to tear into a chicken, (neck was a little distracting). These are sold from the back of specially designed trucks with about 8 racks of roasting chickens. You can buy three for 10$. 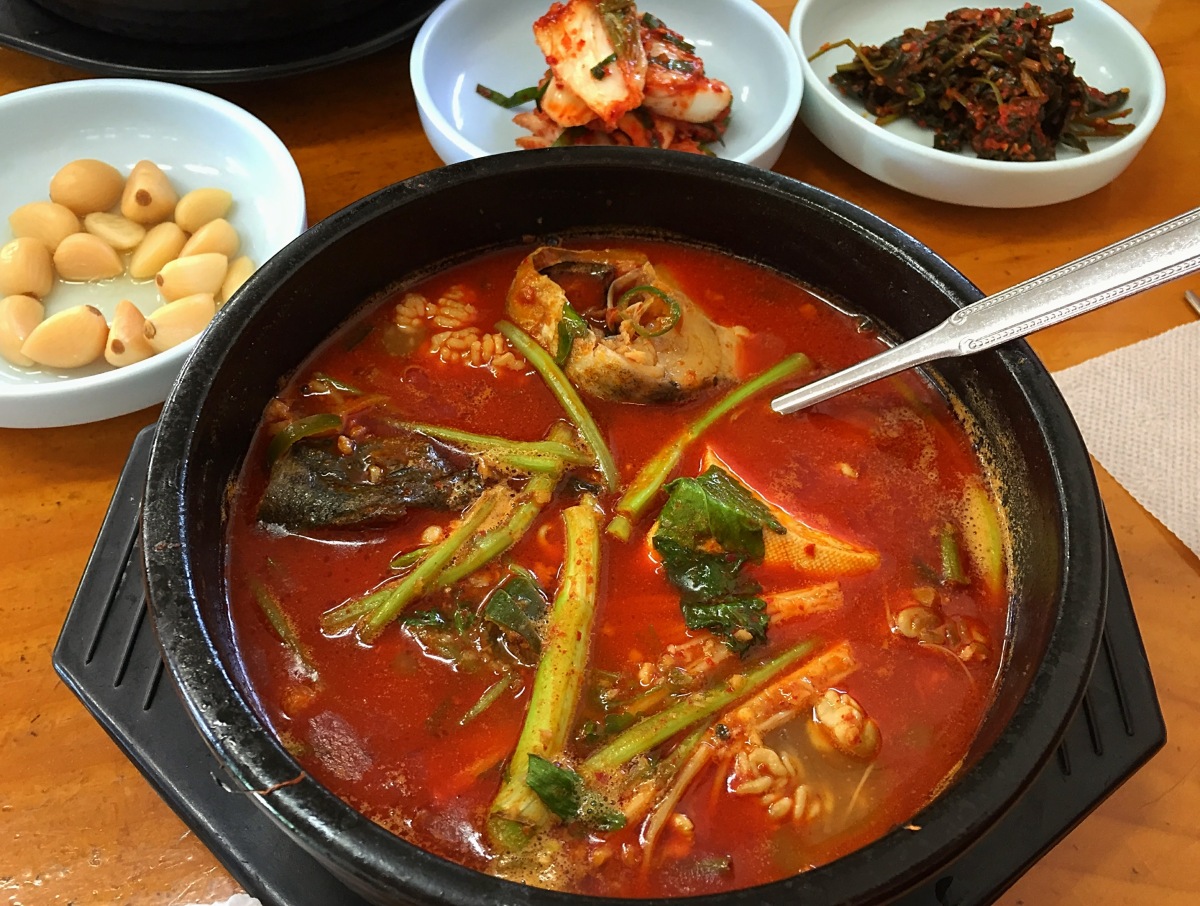 Jordyn and I took her mother out for Parents’ Day here in Korea. We went to her favorite eel restaurant. BBQ eel can be great with a little grated ginger and soy sauce. The soup is a comforting blend of finely ground eel with green veggies. 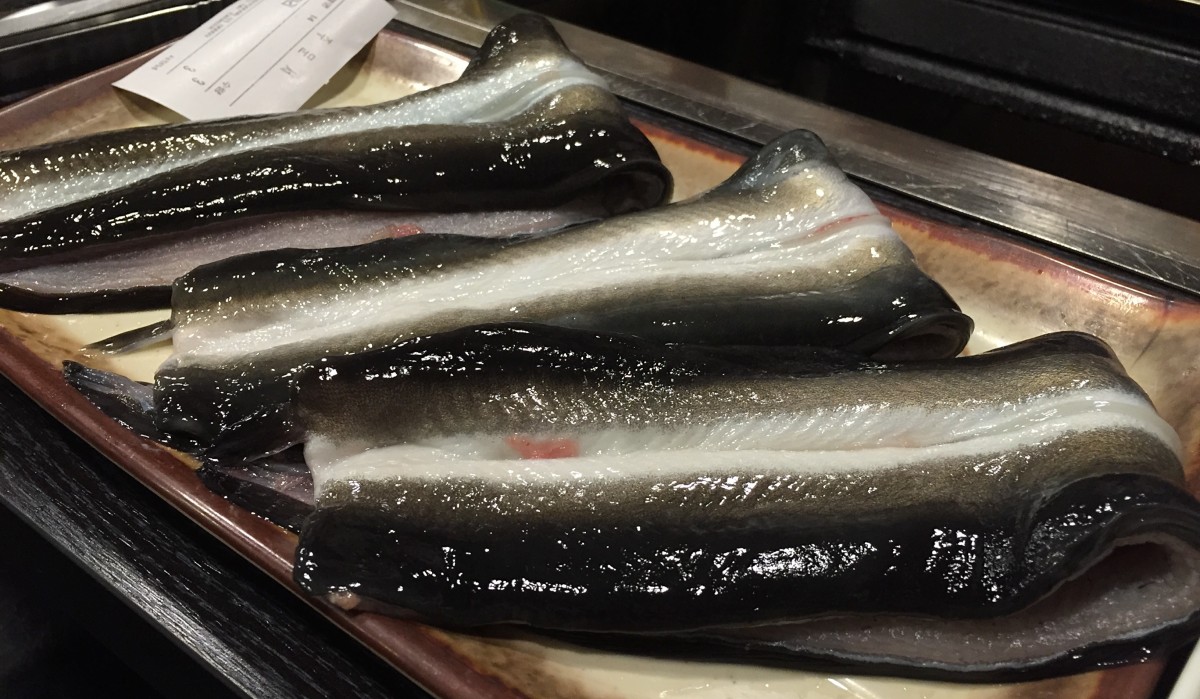 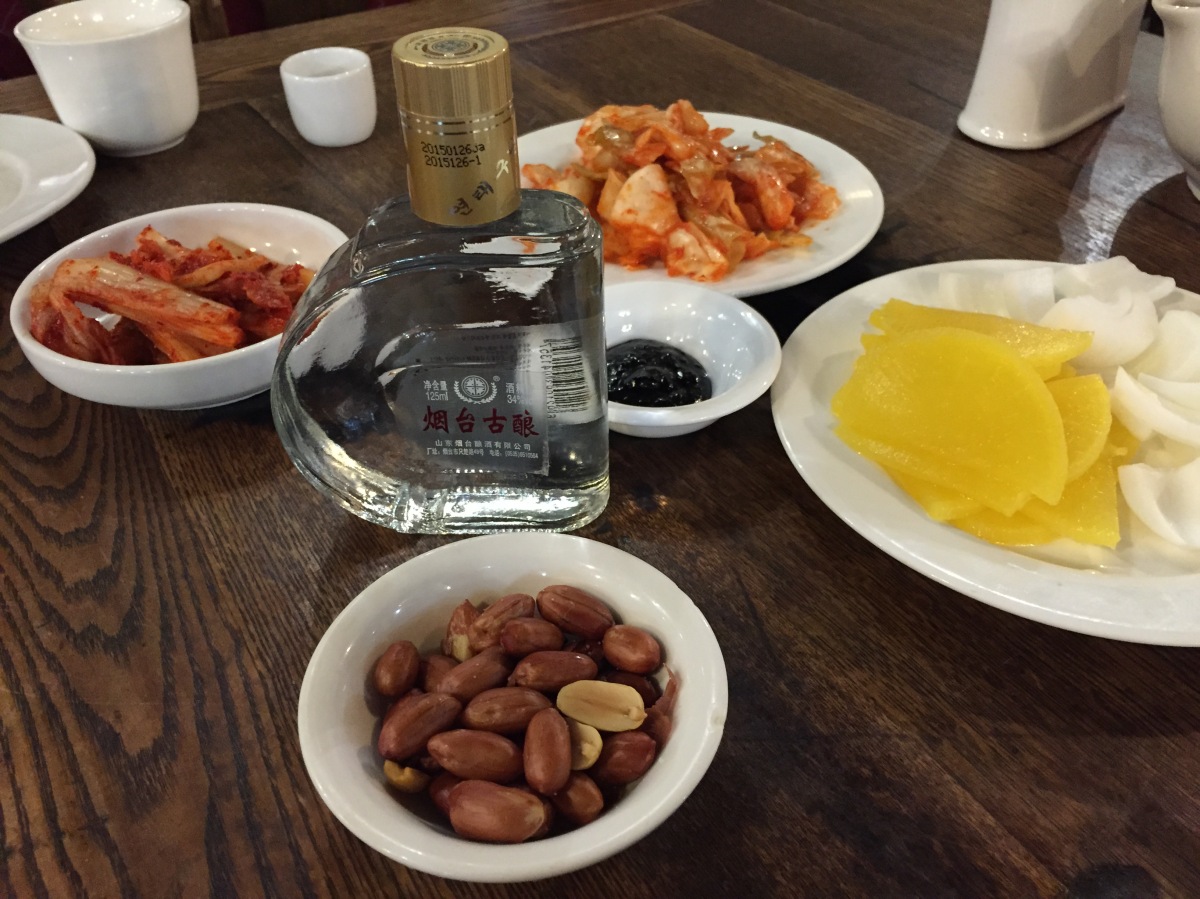 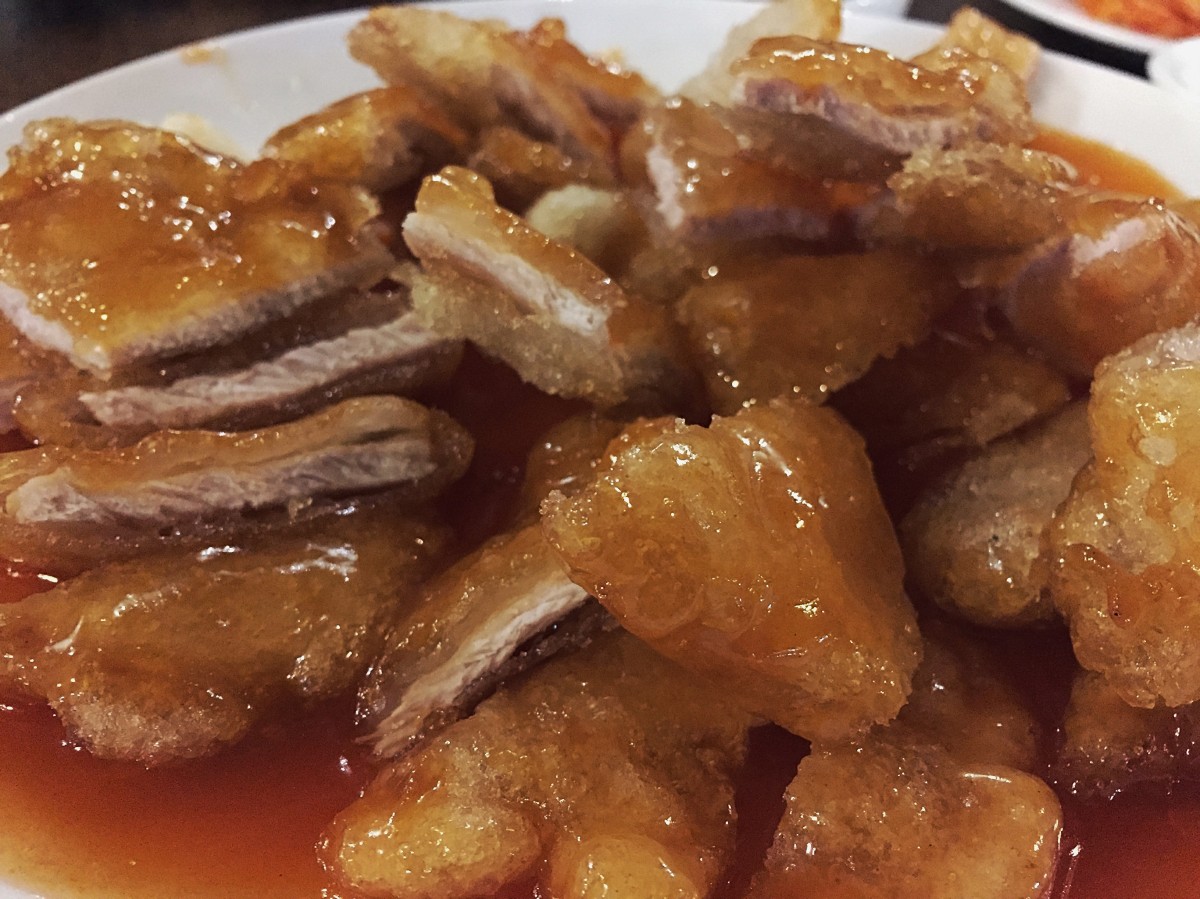 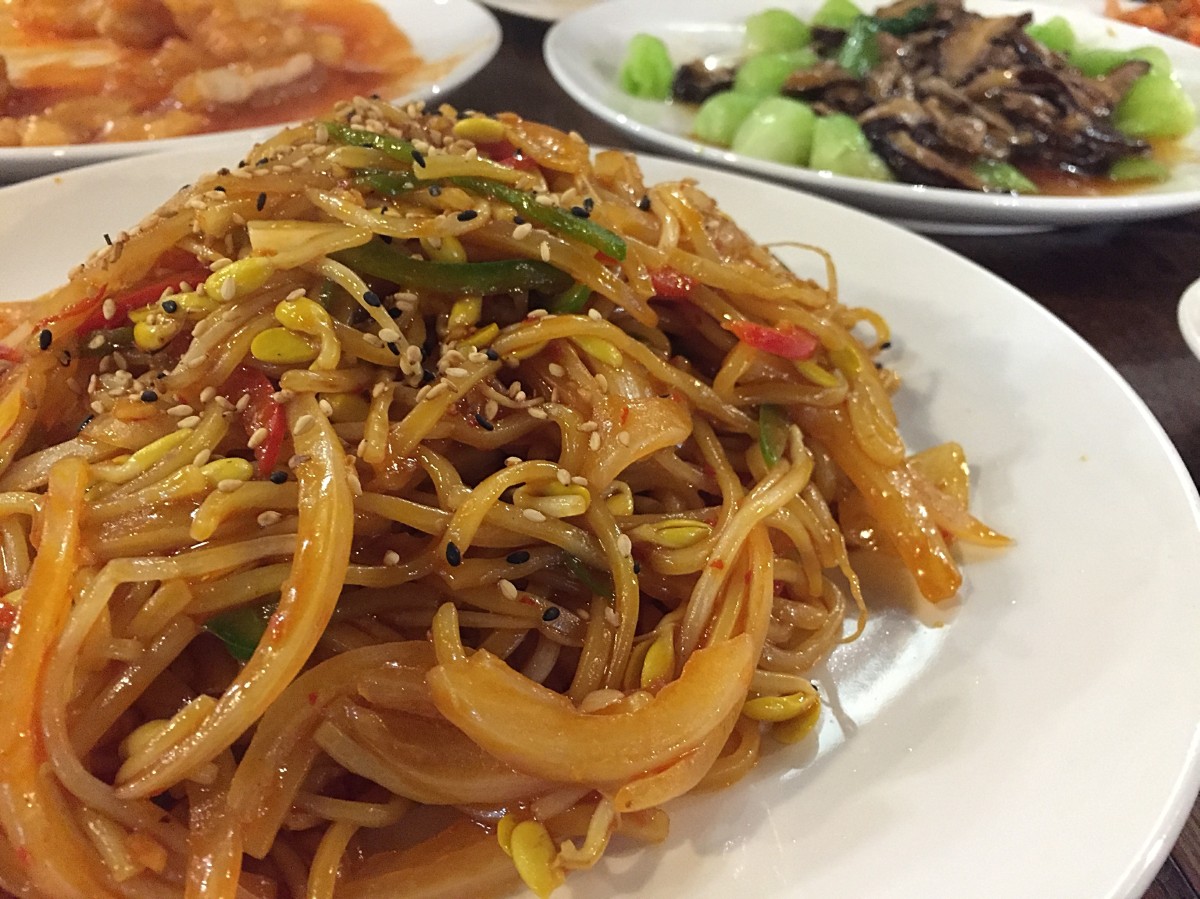 While drinking in Gangnam one night, we needed some food and stopped into a tiny little corner shop near exit 12 buzzing with activity from the younger generation. The old lady chef (ajjuma) cooked up two ramen soups, one spicy, one beefy and pork with red sauce called jeyuk bokkeum (제육볶음). It was spicy, but balanced out the sour beer and soju stomach of a Korean night. 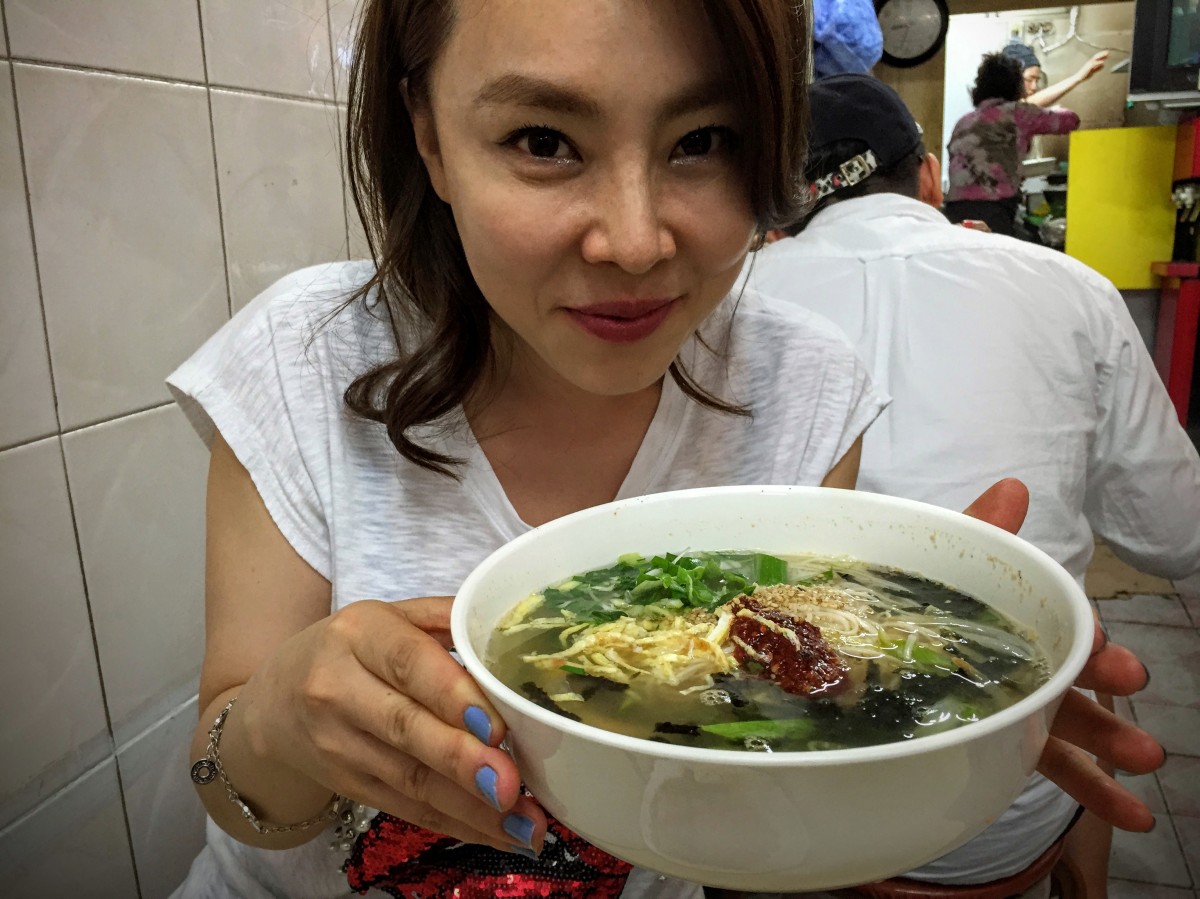 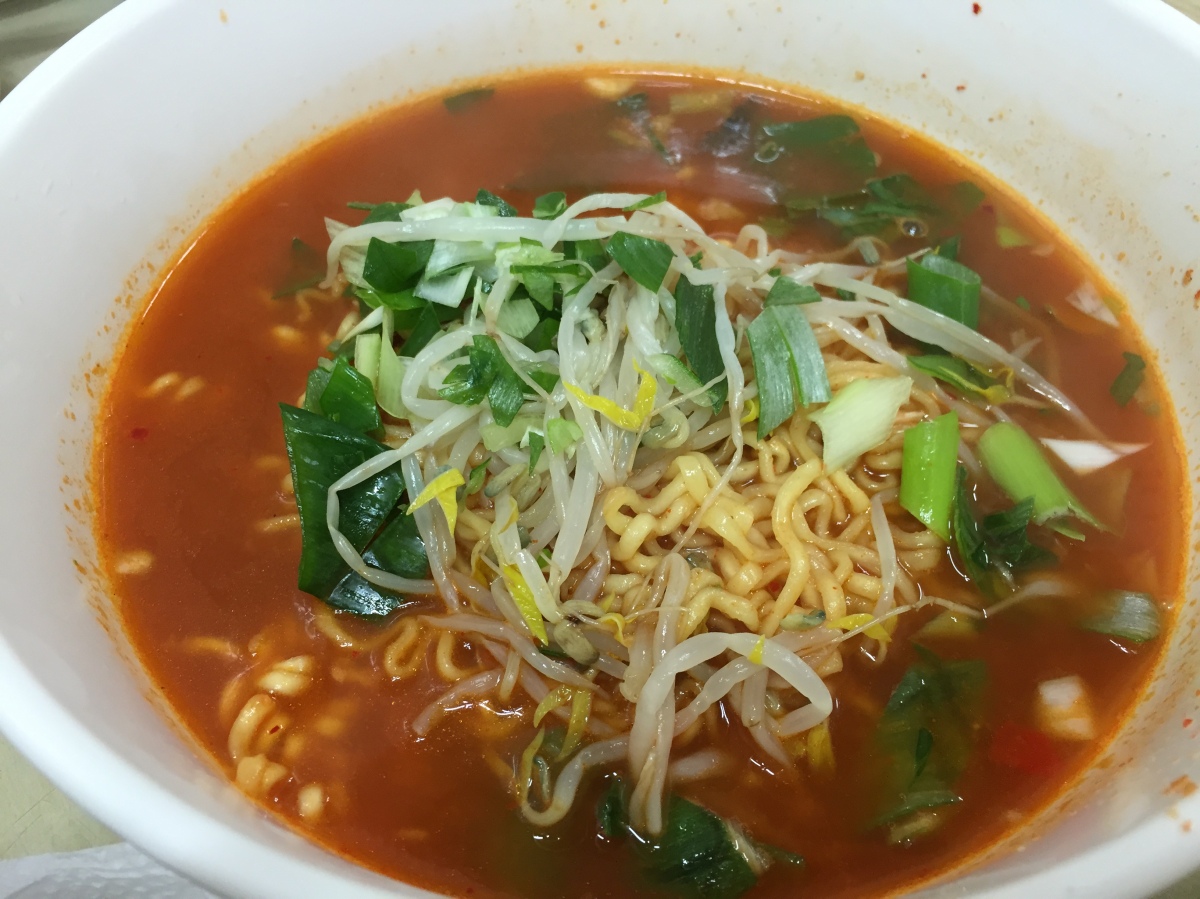 More E.A.T.ing to come in June!

One thought on “A Magnificent May of E.A.T.ing”