Although this wasn’t a strictly cat museum, it did have an entire exhibit of old-timey photos of people with cats. I like seeing these roughneck soldiers with a fluffy little kitty on their lap. It shows that nobody can resist a lovable cat.

And, here I am playing silly with an ornate mahogany chest. 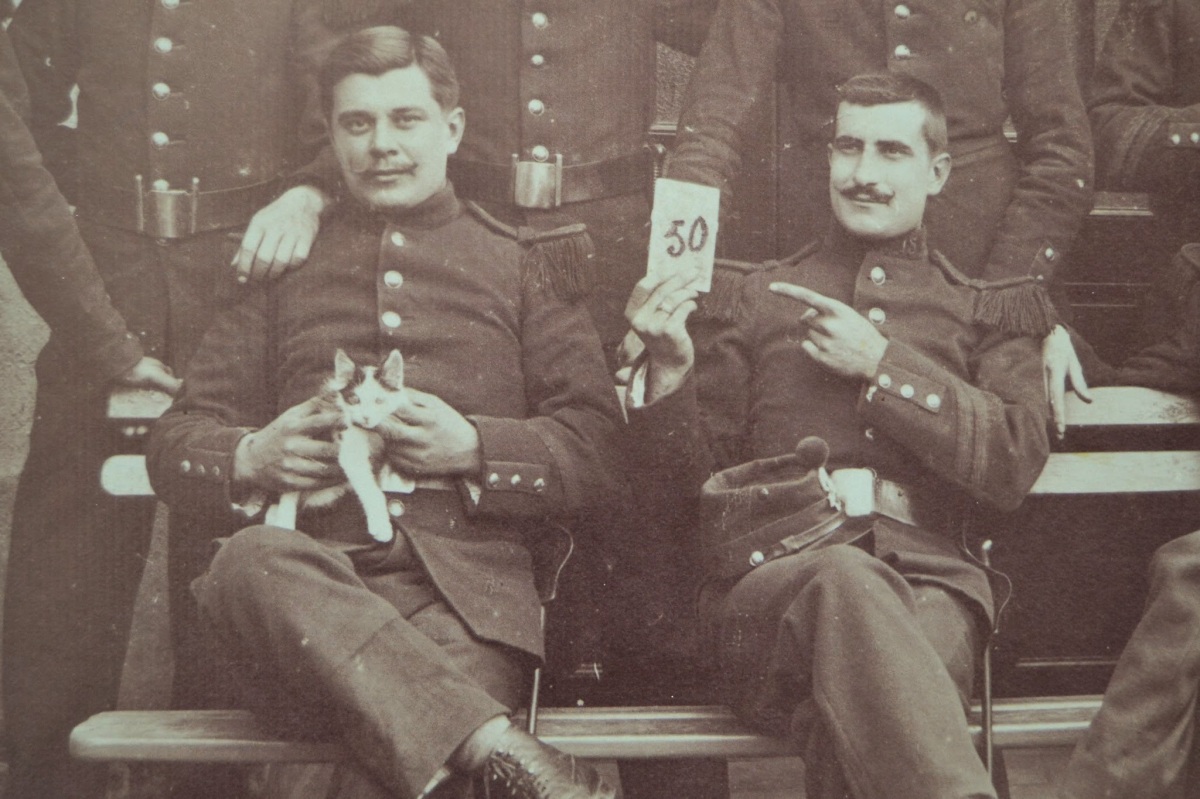 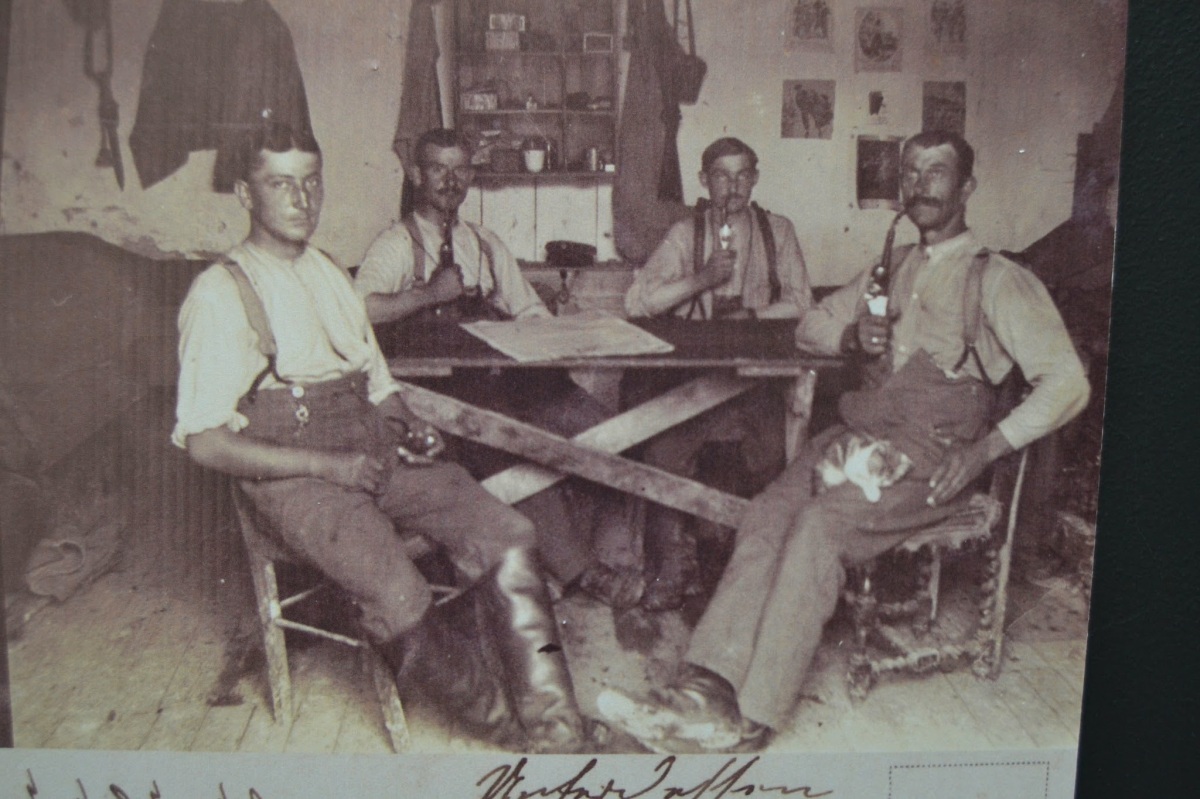 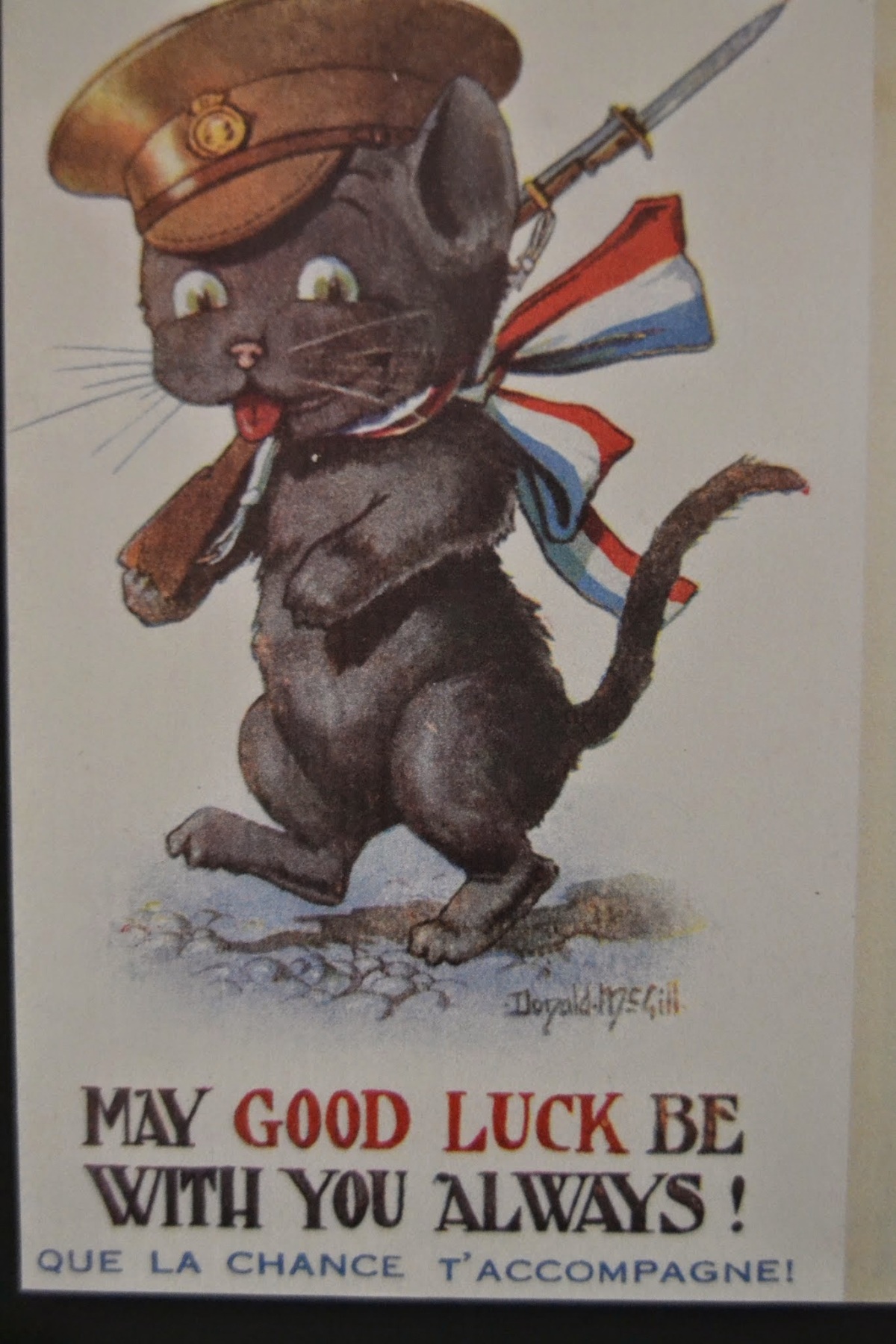 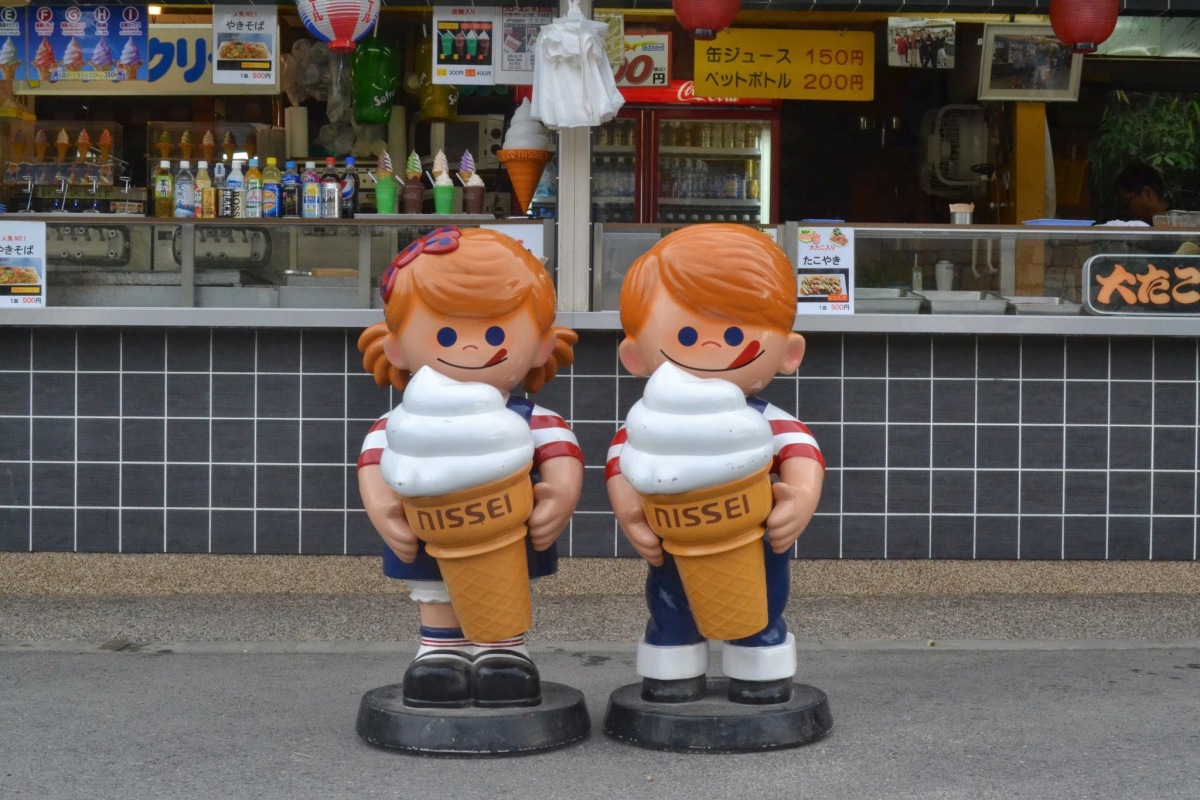 The streets of Japan are eerily clean, almost as if it was cleaned for a obsessive recluse who they were trying to lure outside. There are bicycles putzing along, freshly washed Toyota’s, Honda’s and Mazda’s gleaming down the road and plenty of street food vendors. It has mountains visible from all angles. And, just like any big city, surprises around every corner.

Look at that cat! So fluffy and cute, he ran away before we could touch him. 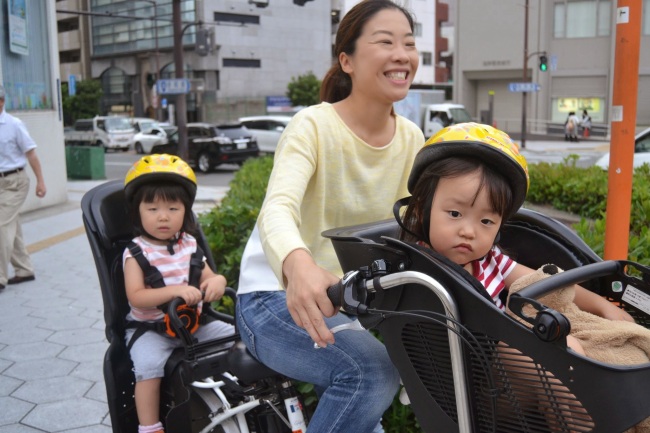 Look at those cheeks! Mom is so happy and proud of her munchkins. 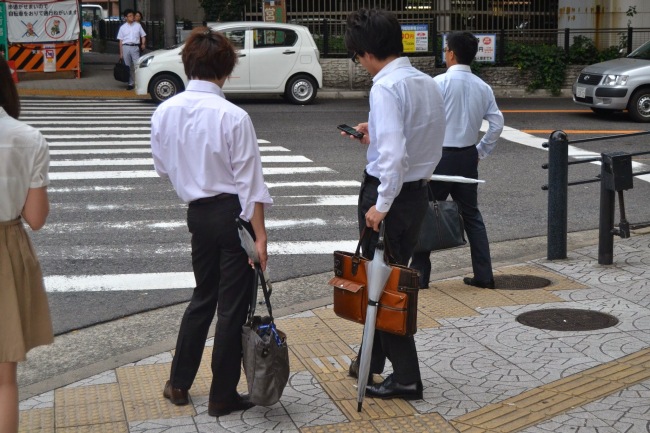 These guys were rail-thin, and looked at their phones as they crossed the street.

I taught Jordyn how to make a fist and she punched me very hard and accurately. Something about a boxing gym makes people want to fight. 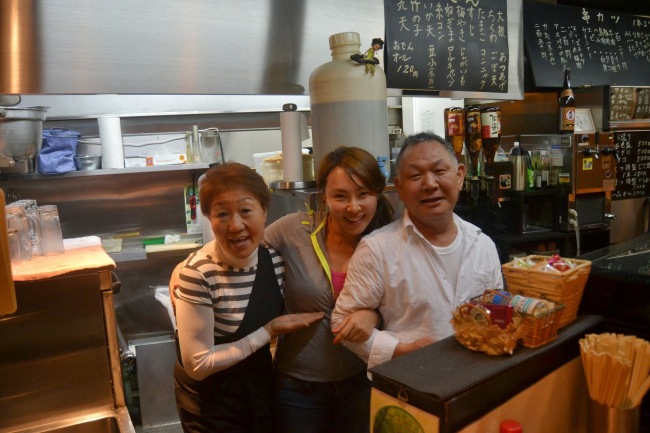 The old guy bought us some sushi on the street and so we followed him back to his bar where we met his crazy wife who talked constantly and laughed loudly like a Japanese Fran Drescher. We drank several bottles of sake here.

I was impressed with the friendliness of the Japanese people. They didn’t bow as much as I thought they would, but they emphatically say “Hai” whenever you ask a question imparting such a sense of importance of your question, “Where is the bus stop?”

On the islands of the West coast of Thailand, sunsets are a quiet reminder that time is actually still passing despite the slow pace of your day. There were some really spectacular views over the ocean, as if the sun was bleeding into the water. We got lucky with really good weather, cloudy and sunny with morning or midnight showers. It’s never easy to leave paradise. 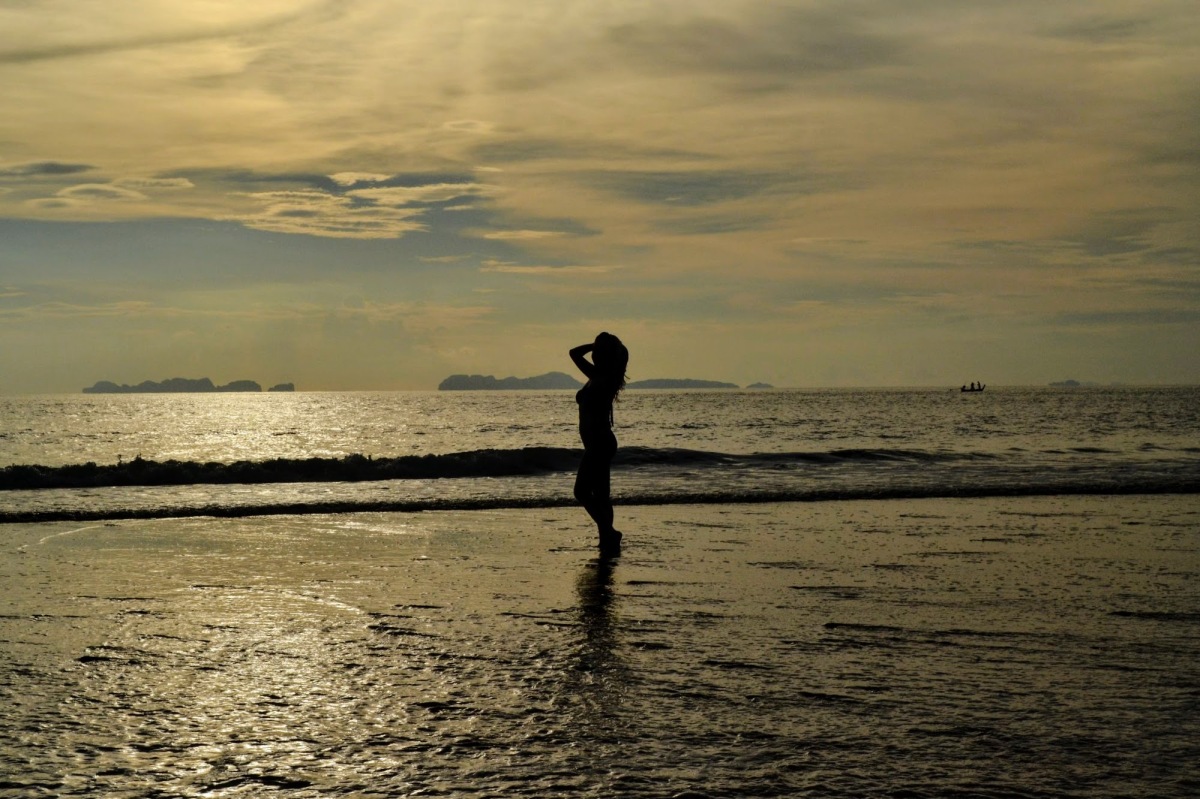 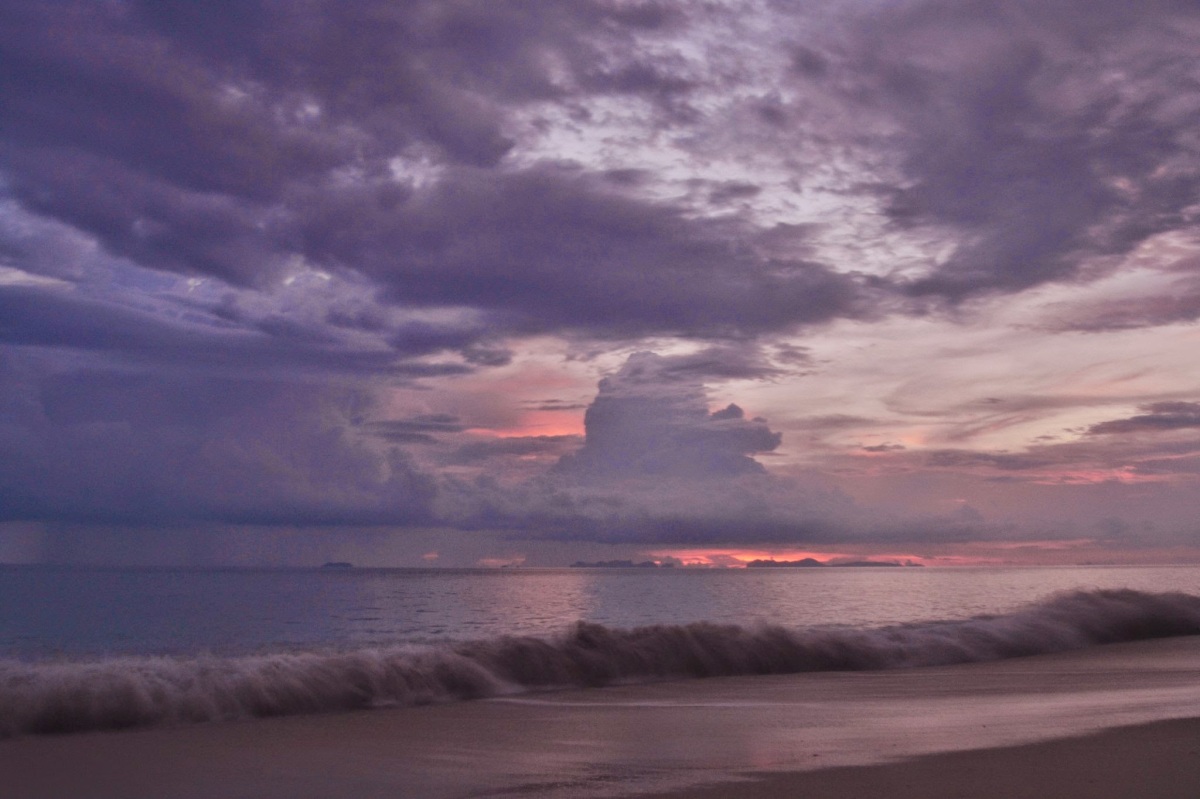 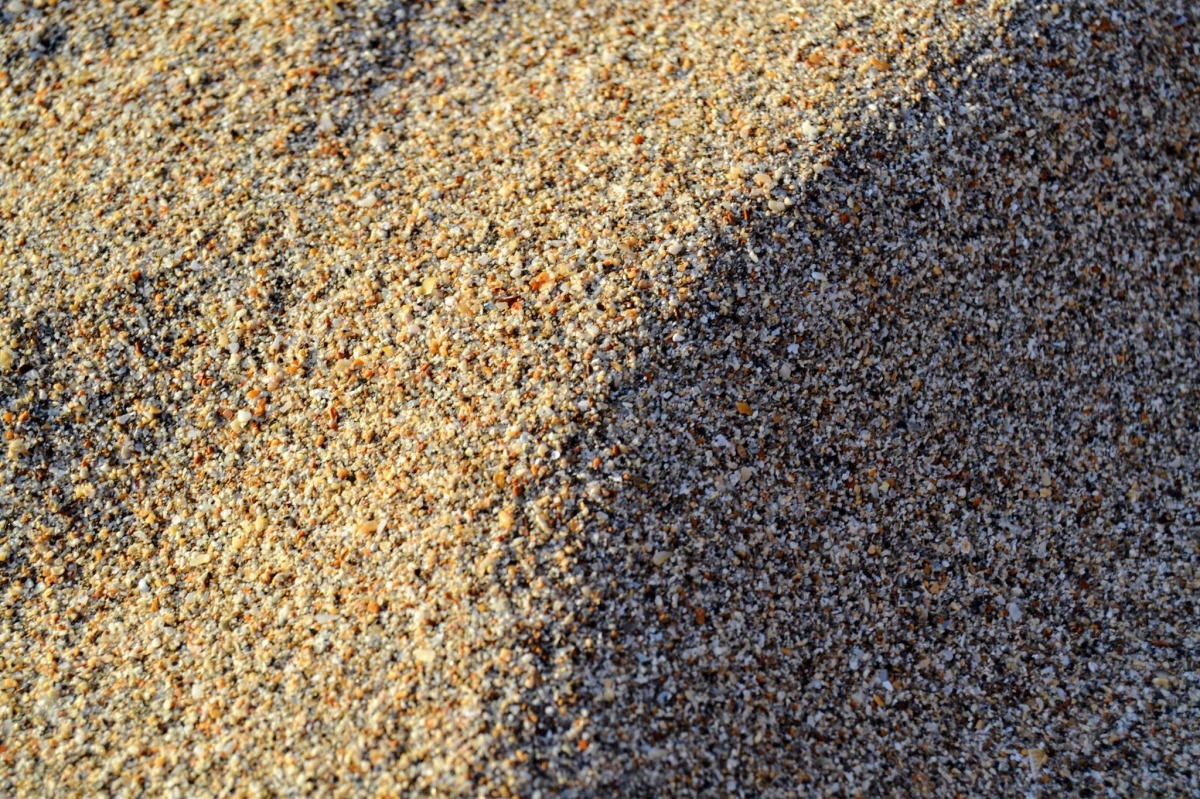 Not all the sand was so coarse. Phuket’s beaches were so fine they made a squeak when you walked. 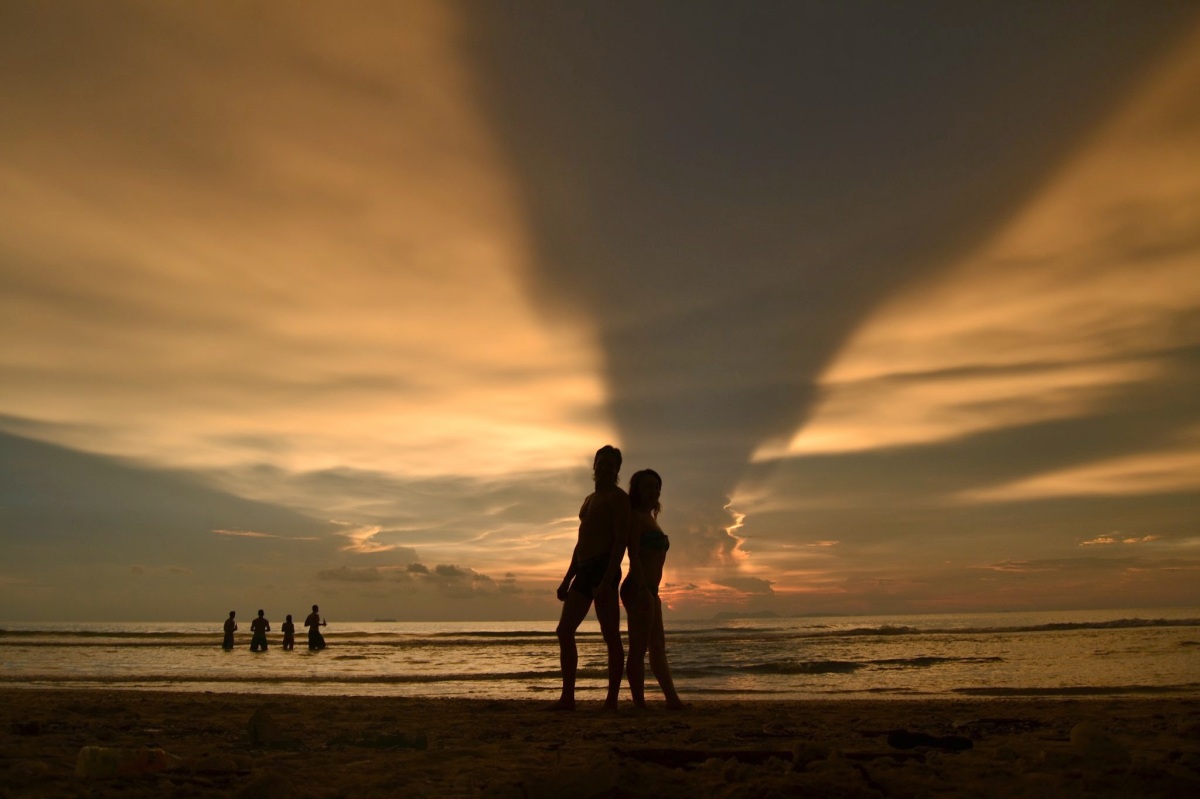 This is one of our favorite sunset pictures together.

Our only beachside hotel was here in Phuket. We swam in the rain and ran home wet in bathing suits receiving stares from the locals in jackets and boots.

And of course, this lovely little cat who followed us all the way up our extremely steep stairs to hang out with us.

Koh Phi Phi is a spectacular island in the Andaman Sea. It was completely wiped out in the Asian Tsunami of 2004, and quickly rebuilt. It is a small island without cars. It’s got lots of chill beach areas, lounge bars, party bars, international food, quality local flavors, plenty of island characters and abundant cat life. These cats are perfectly calm and easy to approach due to lack of predators, lack of cars and human trash acting as daily snacks. It was a relief to have cool cats to hang with instead of the blank eyes of city cats. City cats don’t even recognize you as a possible chance for petting, they stare with fear and dart away. Phi Phi cats look at you and yawn or roll over. The cats represented here are just from a short walk from hotel to bar. Some were quite portly and pleased with themselves, kittens crawled in the plant pots pretending to be jaguars, and others laid on the floor of 7-11’s air-conditioned marble entrance. 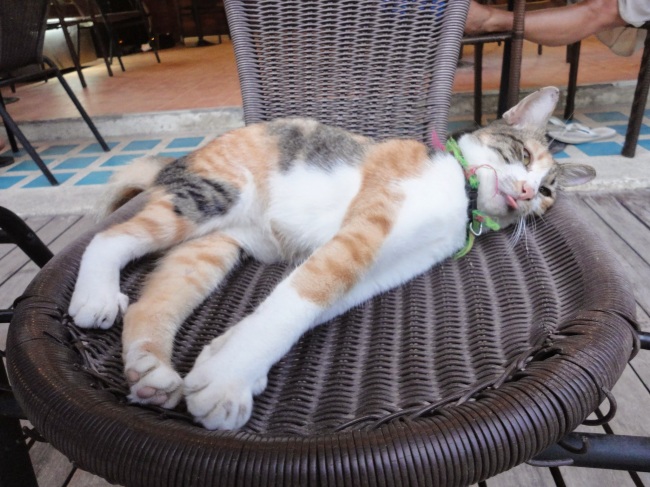 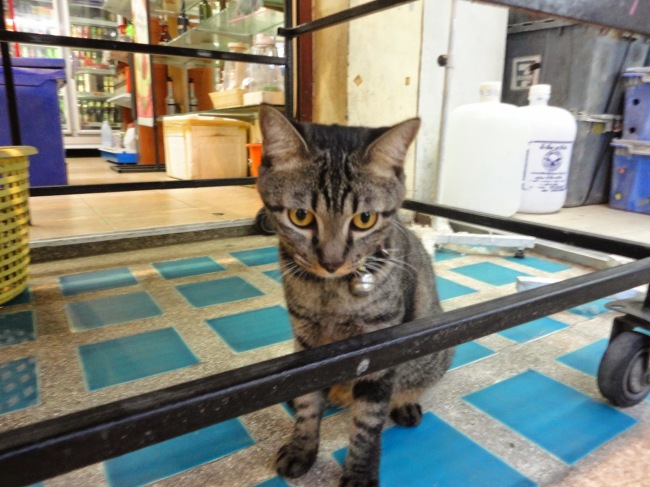 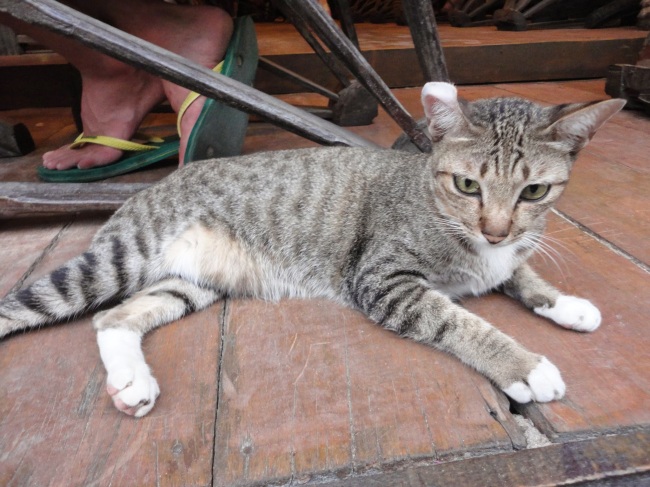 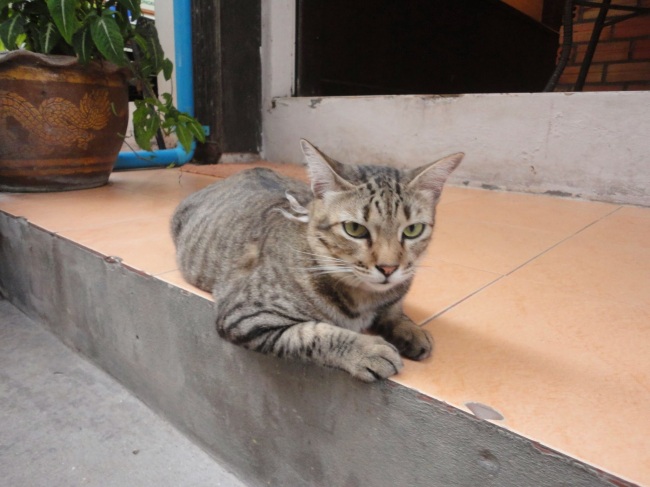 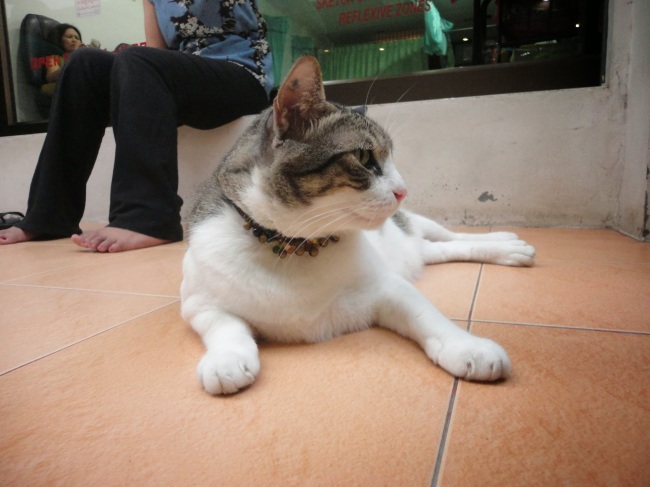 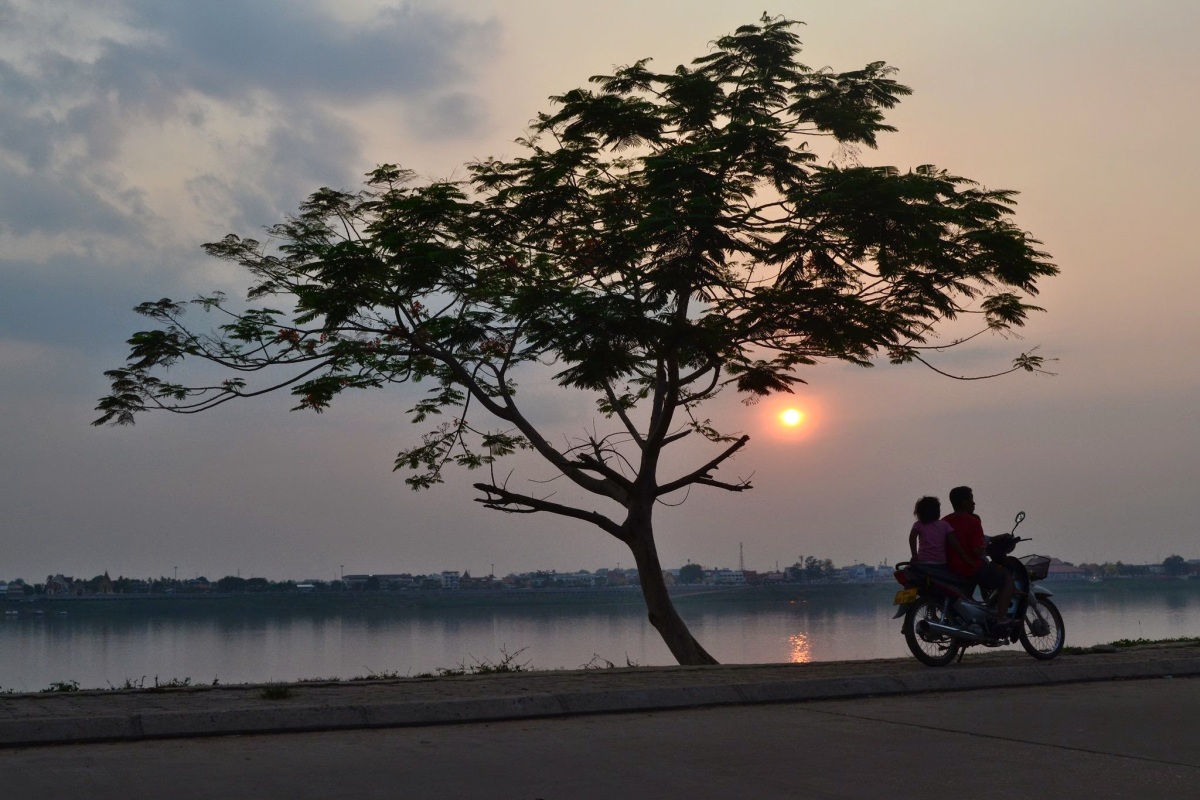 It’s been said by me and anyone who visits this quiet area of Laos, that life moves slowly. These are some of the examples: 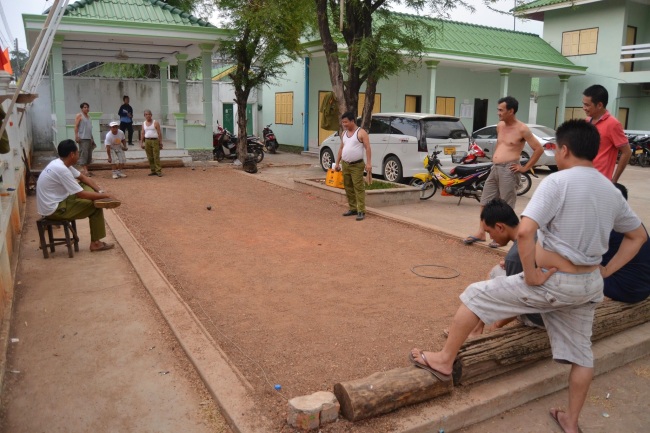 Men love to pull up their shirt to expose round, squishy, non-segmented bellies, especially during bocce ball time.

Some girls respond favorably to my smile, and others look away. I wish I knew what they talk about. 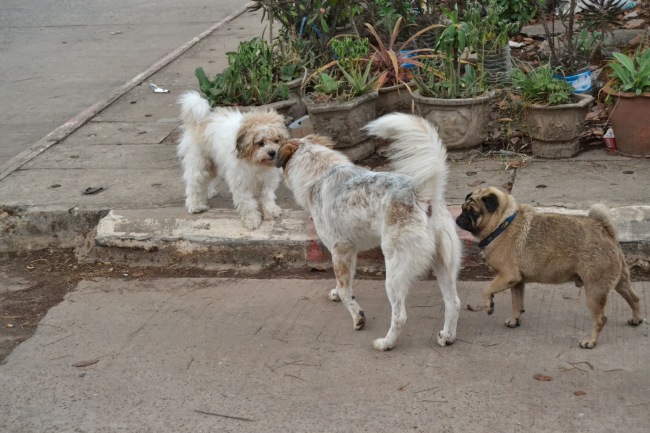 It’s never hard to find cats chillin’, and that pug had just pulled his blunted nose out of the other dog’s butt.

She was singing a song to the evening and swaying gently. Cute.